The brown and pink banner outside The Jeweler on Santa Cruz Avenue in downtown Menlo Parks says it all: “Retirement Sale.” Charles and Mercedes Horvath are not only closing  up shop, they’re leaving their Menlo home, bound for Colorado.

“We have three grandchildren there,” explains Mercedes. “From there we’ll make frequent trips to Arizona where our other two grandchildren live.”

The couple moved to the states from Hungary while in their 20s, first settling in Chicago. “I remember being snowbound and watching a Super Bowl played at the Rose Bowl in Pasadena,” recalls Charles. “California looked pretty appealing.”

The westward move brought them to northern California, not southern, and the opening of the jewelry shop they’ve run as a team for 28 years. 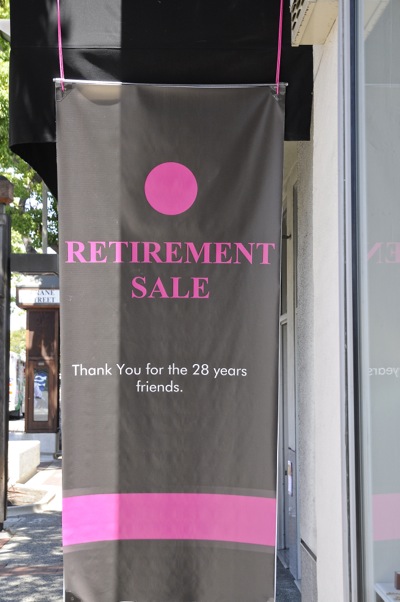 Now “everything must go,” including many pieces designed by Charles. They’re selling their merchandise at wholesale or below because as they say, “we don’t need it anymore.”

It’s a little bittersweet. “In some cases, we’re  on the third generation of customers,” says Mercedes. “There have been a few tears, but we’re looking forward to this new chapter in our lives.”

I was a customer for 20 years, and I’m pretty sure my wife still loves me because of that fact!