We’ve stopped by Mitchell Johnson’s studio a number of times since first meeting him in 2010, but were overdue for a longer visit to learn what he’s been up to in the last few years.

The Menlo Park-based artist told us that he’d recently returned from Reykjavik, Iceland, and had already sold one of the rooftop paintings (pictured below) that resulted from that trip. We wanted to know more about his affinity for roofs. 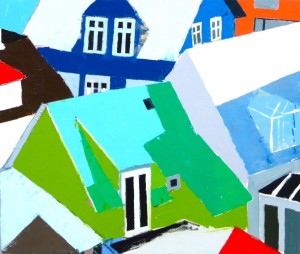 “Rooftops have interesting colors and patterns,” he told us. “It’s a bird’s eye view of things that emphasized the two dimensional quality.”

He’d traveled to Reyjavik because he wanted to see what had influenced the paintings of Icelandic American painter Louisa Matthíasdóttir. “She was married to Leland Bell, one of my teachers in New York,” he said. “By this time of year, the daylight hours are getting longer but the rain, sleet, snow, and knock-you-to-the-ground wind were incredible.”

A number of Mitchell’s large works are on display in the Bank of America lobby (555 California) in San Francisco as well as at 425 Market Street through the end of May. He’ll be giving an artist’s talk at B of A on May 27. Those interested in attending must RSVP (contact@mitchelljohnson.com) for security reasons. (Note: No security required to view his paintings on the walls at Flea Street Cafe in Menlo Park or on his website.)

“The cool thing about the B of A lobby show is that the works can be seen at almost any time of the day by just looking through the windows,” he said. “Both exhibits feature enormous paintings in big spaces.”

Mitchell also has a new hardback book coming out, featuring 200 paintings from the last four to five years. It was done in advance of a solo exhibit of his works at the Bakersfield Museum of Art in 2015. Titled Mitchell Johnson: Color as Content (2014)

, it features commentary by, among others, Alexander Nemerov, who is Professor of Art and Art History at Stanford University.

“I was fortunate to meet him at the ground breaking for the new Anderson Museum on campus,” he said.

In addition to commentary by Nemerov and others, the book features interviews and reproductions of other artists’ works.

“Putting a book together is a great complement to the solitariness of working in a studio,” Mitchell said. “It tests you about how you want the viewer to understand your work.”

Please let me know about any upcoming exhibitions in New York City. Thanks!

No plans for shows in NYC, just shows in the NY Times Style Magazine. Watch for the next appearance in October! My new book, Color as Content, is finally available at Amazon.