John Freier (pictured above), founder of start up Statricks located on Haven Avenue in Menlo Park, believes he’s lucky to be alive.  But he also feels a bit snake bit as cars keep crashing into his building. He tells the story:

“At about 2:00 am Saturday, February 15, a drunk driver plowed off the road in Menlo Park and drove straight into our office. In the process, the driver took out a main water line, which then proceeded to flood everything that wasn’t already destroyed on impact. An office chair, previously mine, was pinned between the car and the steel hallway studs, but thankfully I had just left.

“Unfortunately, since the police arrest the suspect at the scene, you’re not able to get any insurance information for at least two weeks until the police report is released. 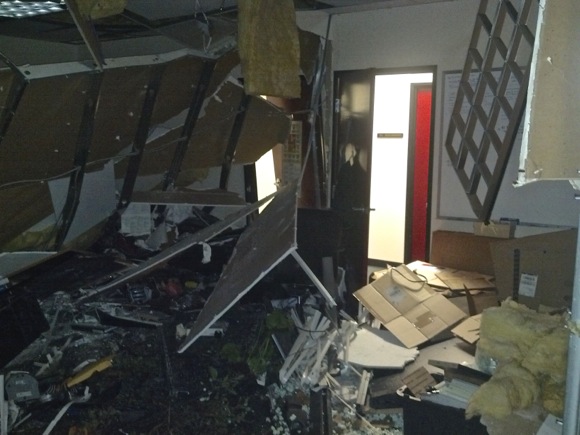 “We were stuck in limbo with none of our stuff , not knowing if the person who had destroyed it had insurance. We were really nervous.

“As it turned out, the person had $5000 worth of insurance, which didn’t cover all of our losses. We used the magic of credit cards.”

With that boost, John and staff were able to get things running again, although they are still looking for additional money. They moved one office down the hall.

Then, about a month ago, he was sitting at his desk, which looks out at Haven Avenue just north of Bayfront Expressway, when he heard a big boom. 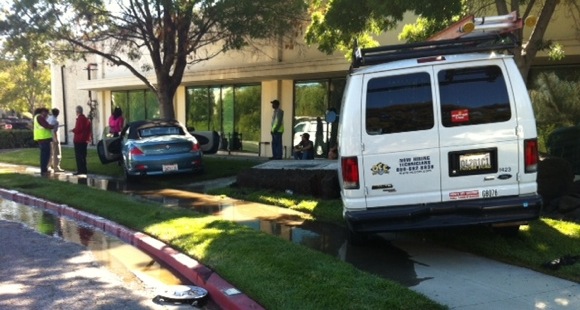 “It was another accident, this time involving two vehicles which came flying straight toward us. Luckily they were stopped by a tree and the new cement slab that was put up after the drunk driving accident.

“We didn’t suffer any damage this time, but I lost my protection as the boulders that were put in got taken out by the two cars.”

John added that the building’s landlord has been trying to get the City of Menlo Park to put in a protective guard rail in front of the building for some time.

Wow. just wow. I work at the Comcast station nearby and me and my crew were in shock to see this – it felt like the other one was just yesterday!!

Found this through a reddit submission ( http://www.reddit.com/r/urbanplanning/comments/2d1ngr/our_startup_just_driven_into_for_2nd_timethoughts/ ) – great to see someone from local news (hopefully) bring some attention that might get this fixed!