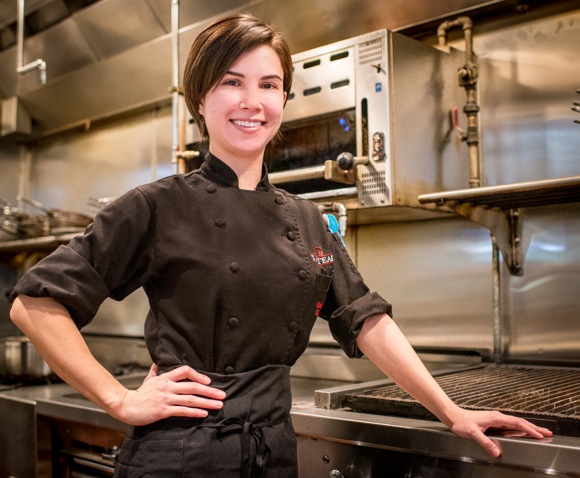 When describing Kelsey Casavan, the current Chef de Cuisine at LB Steak in Menlo Park, the words “resolute” if not downright “plucky” come to mind. At age 30, she’s already tackled two career paths that find many people knocking on doors for years.

A native of Vancouver, as a teenager she was intent on pursuing dance. To audition for summer intensives she either had to go to Seattle or audition by video. “Going away for a summer intensive is the gateway to getting a job with a company,” she explains.

After high school, she was accepted to a summer intensive in Atlanta — and stayed for nine years as part of the Atlanta Ballet.

“As a ballerina, you know you can’t dance forever,” she says. “You know any performance can be the last one. A career in ballet is limited.”

When her husband was transferred to the Bay Area, Kelsey retired from dance. She was interested in attending culinary school but had no savings. “I didn’t have any professional experience in the kitchen, but I knew about cooking,” she recalls. “So I took a job as host at the Left Bank in Larkspur. Then I had an opportunity to take a pantry job there.

“I was able to move over to hot line, which was hard because I was the only female in the kitchen. Then I became heavily involved in prep and finally became lead cook. That means you’re in charge in the absence of chef and sous chef, which I did become 16 months after moving into the kitchen.”

Kelsey credits the experience she gained from Master French Chef Joel Guillon and Chef de Cuisine Fabrice Marcon for her rapid ascent and success in the kitchen.

When we visited she was particularly excited to be cooking a fundraiser dinner at Filoli with her “partner” down the street, Left Bank Chef de Cuisine Brendy Monsado. “We get to cook in the real kitchen!” she said. “I think that’s so cool!”

About her two careers, she observes: “With dancing, you are the focus. Everyone can see what you are doing. In food, you are in the background. It’s kind a faceless. You’re producing a product. In both cases, you are judged.”