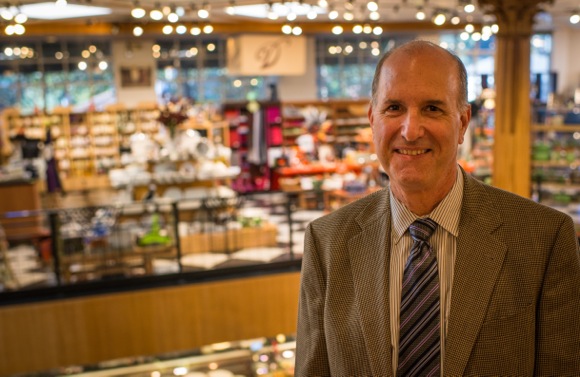 Ask Peter Draeger about his involvement in the three-generation family business, Draeger’s Market, and he’ll admit to surprise at his current role. “I always figured my older brothers would go into the business, that there wouldn’t be a place for me,” he said. “I majored in finance at Santa Clara and went into banking after I graduated.”

But as the Market expanded from a single to multiple sites, there was indeed a need for a “numbers man” and he joined the company in 1985 and is currently the company’s CFO. He’s been involved in the re-building of the Menlo Park store — a downtown fixture since 1956 — and the building of the San Mateo store as well at the supermarket company’s expansion into the East Bay with a Danville store. (There is also a store in Los Altos.)

We’d met Peter at the Menlo store and spent some time reminiscing about the original market, which looked more like a bowling alley with its bow string truss architectural style. “That was used so there could be clear lines of sight without posts inside the store,” Peter explained. “But over the years, the beams lost their integrity, and we had to put in posts and steel girders.”

Eventually the old store was replaced with today’s 46,000 square foot store, using an amazing feat of construction: The outer building was demolished and rebuilt with a temporary structure while the new store was built around it. “I remember one day during the construction that customers had to use umbrellas while they shopped as the rain fell through the temporary ceiling,” Peter said with a chuckle.

Our conversation with Peter turned to where he’ll be this Saturday (Oct. 18). For the 20th year in a row, he will be among the walkers participating in the JDRF Bay Area Chapter’s annual Walk to Cure Diabetes at California’s Great America in Santa Clara. (JDRF was formerly known as the Juvenile Diabetes Research Foundation.) The Silicon Valley Walk has set a fundraising goal of $335,812 to help fund critically needed type 1 diabetes (T1D) research.

Peter was a founding member and served as President of the JDRF Silicon Valley Branch. He has felt aligned with JDRF on the commitment to fund research for a cure since both of his sons were diagnosed with T1D over a decade ago. “JDRF’s mission is what most attracted me to the organization and the Walk is the best vehicle for carrying out that mission,” he said.

Peter’s Walk team, known as Draeger’s Epicures for the Cure, rallies store employees, friends and family to fundraise for the Walk each year. Last year, they raised more than $16,000, adding to a grand total of over $350,000 in fundraising and sponsorship since 1994. Draeger’s Market also sponsors the Silicon Valley Walk, supplies refreshments, and sells JDRF paper sneakers at their store registers. Registration for the Walk is available online.

We returned to talk about the Market with this writer’s observation that many of the employees have been at the Menlo store since she returned to the Bay Area in the early 90s. “We are a big family,” said Peter. (He has five brothers and four sisters.). “Family is at heart who we are. We try to be connected to our employees and recognize those who are are doing a good job. That aligns with our goal to be part of  family celebrations in our communities.”

They are a family own business. I am a butcher for 15 years. Love it. Best company I ever work 🙂