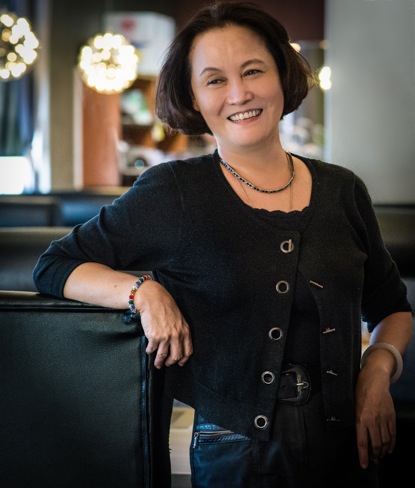 About attaining 2015 Bib Gourmand recognition from Michelin, Fey Restaurant owner Han Ying Wang (pictured) is enthusiastically matter-of-fact: “This restaurant is my life,” she said. “I am so lucky!”

Since 1955, the famous red Michelin guide has also highlighted restaurants offering “good food at moderate prices”, a feature called “Bib Gourmand”. They must offer menu items priced below a maximum determined by local economic standards. Bib (Bibendum) is the company’s nickname for the Michelin Man, its corporate logo.  This year 76 spots in the greater Bay Area earned the prize. [Note: Menlo Park has one one-star Michelin restaurant, Madera at the Rosewood Hotel.]

This may be Han’s first restaurant in Menlo Park but she’s been involved with two others on the Peninsula for 20 years.

About her current location, she said. “I love Menlo Park. The people are so nice.”

Fey is a terrific addition to Menlo Park. I still pinch myself that we have a local restaurant that caters to lovers of authentic Chinese food at such reasonable prices. My favorites are the chilled celery appetizer, “goose down/chicken fuzz” baby bok choy, and cumin lamb, but everything I’ve tried has been fresh and carefully prepared. Good work Michelin for singling it out!