MPPD update on 2.24: “Due to last night’s accident, repairs are continuing on the rail road tracks. At this time, it’s an unknown ETA for completion, however we have been told that repairs will be hours well into the afternoon.”

Around 4:00 pm today (2/23/15), a southbound Caltrain struck a west-bound passenger vehicle at the Ravenswood Avenue crossing in Menlo Park.

The Menlo Park Fire District responded with two engines, a ladder truck and Battalion Chief. The first-to-arrive reported a woman pinned in the vehicle, which had been knocked across the intersection some 40 feet coming to rest on a crossing box and pole. 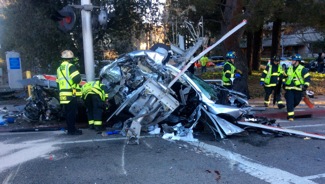 The female patient was rushed to Stanford Hospital by Fire Paramedics where she was pronounced dead. A child seat was found in the vehicle, but it was determined to be unoccupied.

Rail traffic in both directions was stopped while firefighter secured the vehicle and extracted the patient. The passenger train came to a stop about a quarter mile down the track. No one on the train was injured.

“This is a terrible tragedy, we don’t know exactly what happened but trains can’t swerve and if you get caught on the railroad tracks it can be disastrous as we have seen tonight,” said Fire Chief Harold Schapelhouman. “Our hearts go out to this victim and her family.”

The Menlo Park Police Department and Sheriffs Deputies assigned to Caltrain are conducting an investigation into the incident. As of Monday night, the intersection remained closed due to the accident and emergency repairs to the train tracks.