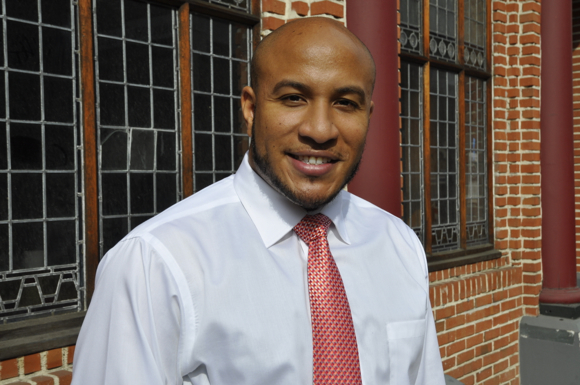 Some things are meant to be. Such is the case of Corbett Phillip Powell’s appointment as the new Executive Director of Peninsula College Fund, an organization founded in 2005 by Menlo Park resident Charles Schmuck, that provides selected high school students with college scholarships, one-on-one mentoring, summer internship support, and college and career success training.

Phillip, as he is known, grew up in the Hunter’s Point area of San Francisco. His mother fought drug addiction and his father was often incarcerated, leading to his grandmother raising him. He showed academic promise while attending Phillip Burton High School and applied for and received a scholarship from the Meritus College Fund with an additional four-year scholarship from Fisk University, which he attended, graduating with a B.A in psychology, religion and philosophy.

“Dr. Henry Safrit was the founder of Meritus,” explained Phillip. “I saw the opening for the PCF Executive Director on a job board and told Dr. Safrit about it. It was then that I learned that Charles had met with Dr. Safrit a number of times, modeling PCF after Meritus. Charles considers him a mentor and so do I. It’s an amazing small world story.”

Not surprisingly, Phillip is passionate about helping students whose upbringing parallels his experience. “I understand that one person can make a difference for a student, between taking the right road instead of the wrong road,” he said. “I always say, ‘there’s no elevator to success. You have to take the stairs one step at time.'”

Currently, PCF is granting scholarships and help to about 20 students a year. Last year, 90 applied, of which 50 were qualified. “My goal,” said Phillip, “is to fund that gap.”

Since its inception in 2005, more than 90% of PCF scholars have graduated from college or attend college on the path to completion. Some of the older ones are talking about giving back to their hometown communities. That’s a path Phillip is already on.

More information about the Peninsula College Fund is available on its website and in a new video.