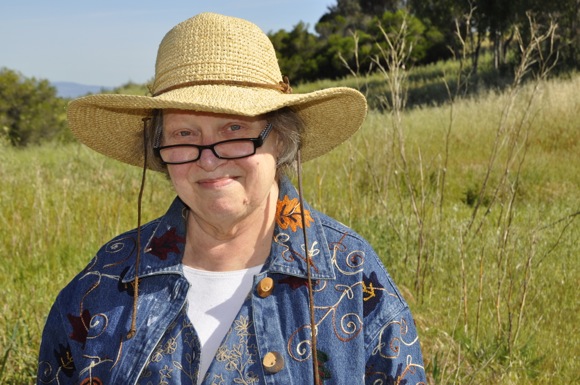 Artist Susan Dunlap, a Menlo Park resident since 1977, recalls how she felt 30 years ago when the final phase of her stone sculpture at Bedwell Bayfront Park was completed. “A 505-ton sculpture was what I needed to get Christo off my back!” she exclaims with a wry smile. “With that pressure gone, I was released to explore what I wanted to do.” 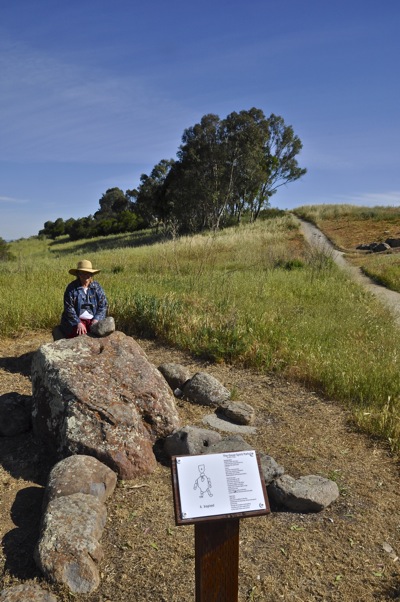 Those explorations include painting, photography and founding a company, Aerulean, that develops plant [as in vegetation] software. But we’d met her at the park to talk stone sculpture.

Some background for people who haven’t visited what is called The Great Spirit Path Sculpture. Spread over a three-quarter mile trail, it is the largest sculpture of its kind in the world. The 892 rocks that were used to construct it are from a quarry in Sonoma and a meadow near the Stanford Linear Accelerator. Accompanying the sculpture, described as a “stone poem,” is a four-stanza written poem.

A brochure is available for visitors that describes the 53 separate sculptures that make up the whole. It explains that the “rock clusters were inspired by American Indian Pictographs, a visual language system designed and used by various Native American tribes to record events in their daily lives.”

“I was on the city of Menlo Park’s Beautification Commission at the time plans for the park were being circulated,” recalls Susan. “I started thinking about what I could do that would make it an appealing park for the people of Menlo Park and became intrigued by the possibility of using rock.

“Every other park I’d been to used rocks as barriers, but my idea was to use them as a design element. And rock could endure. I marvel at how many are still in good shape.”

In the 30 years of the sculpture, some rocks have been rolled down the hill whether by nature or force, and some of those that were epoxyed are no longer together. It’s Susan’s ambition to continue a restoration effort and she hopes people who are interested in joining her will contact her: susan@aerulean.com.

We’d be remiss if we didn’t mention Susan’s website of fine art. As she sums up: “Left to do anything, I’ll always turn to painting.”

I have walked by most of these over the past few years. Very interesting. Some of the descriptions at each one are a bit worn. It would be nice if the park would keep the grasses cut around them.

I have lived in the bay area since 1983 and only now stumbled on to the Great Spirit Sculpture. It was a real treat!