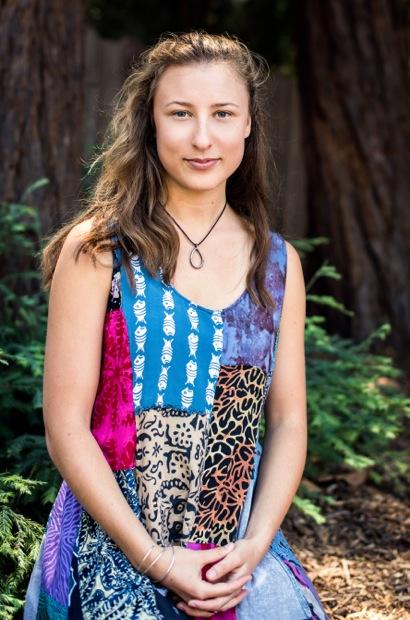 Since graduating from Menlo-Atherton High School in 2014, Georgia Reid has participated in a Global Citizen Year in Ecuador where she did an apprenticeship involving potable water. She’ll head off later this month to Lewis and Clark College in Portland, but her focus in the meantime is funding for Raindrop Box, a system to collect, store, and utilize rainwater in place of tap water.

“My Dad and I dreamed it up a couple of years ago,” she said. “He’s an inventor and has been inventing all sorts of things for as long as I remember.

“When I was in Ecuador and involved with potable water, I kept hearing about the drought here in California. So, when I returned, I set my mind on doing something drought related and teamed up with Ali Salahuddin, who is a product design engineer. We came up with the Raindrop Box.

Here’s how it works:  Rainwater is diverted from your gutter system (diverter provided) into the connector in the top of the Box, filling it with water. Once the water is captured in the Raindrop Box, you use one of the quick-connect hose fittings (one is pre-installed on each end) to connect your garden hose or irrigation system, or to connect one Box to the next to extend your capacity.

“The average household can collect 6oo to 700 gallons of water from 1/2 inch of rain,” noted Georgia, who is raising funds for her venture through Kickstarter. For a pledge of $150, a person receives one of the first Boxes. The campaign goal is $20,000, about half of which has been raised. The cutoff is August 15.

“The benefits of Raindrop Box are both environmental and personal,” said Georgia. “The water doesn’t settle and go back into the aquifers, which are now very low and about to collapse. By capturing the rainwater, the aquifers get a break.

“Plus, people can save money as fresh water prices rise. We look at it as the right thing to do — and it’s not hard.”

Of course, to take advantage of Raindrop Box, it needs to rain. “We’re hoping the predications for El Nino are correct,” said Georgia. “The rainy season is coming and we’re planning for that.”