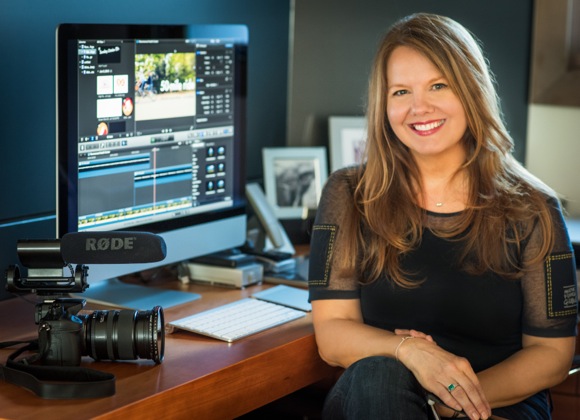 While at college in Wisconsin, Menlo Park resident Connie Tamaddon decided that majoring in art wouldn’t “pay the bills,” so she switched to business. But it’s art that’s turned out to be her chief pursuit.

Now that her two kids are off at college, Connie is eager to expand her services as a videographer for non-profits. Her most recent effort is a video in advance of the 7th annual Ride and Yoga for Ravenswood, a fundraiser Ravenswood Family Health Center hosted by the Brody family at their Atherton home.

“Julie [Brody] approached me about putting some photos together from last year’s event, explained Connie. “We went beyond that and did a video featuring 13-year-old Michele Martinez. It shows how the Health Center has been beneficial to her and her family.

“My daughter Arianna, who’s a sophomore at Wesleyan University, was my assistant when she was home this summer. I thought it was so sweet that she wanted to help. She even took on the role of one of the bike riders!”

Connie does her video work for non-profits on a pro bono basis and is open to hearing from other local organizations that might be interested in her services. “I find it really rewarding work,” she added.

Producing videos may be her focus now, but Connie has long contributed her talents to local schools and organizations. She has one lasting claim to fame that will resonate with current Oak Knoll School parents and children. She created the school’s mascot, Ollie the Otter.

Nice story about good people raising funds for a great cause.

In reading the story and clicking links, I did not find one that showed the moving pro bono video that Connie produced. Here is a link to it so readers may watch it: http://4ravenswood.org/2015/06/12/event/