Kikim Media film “In Defense of Food” being screened at Stanford on Oct. 20 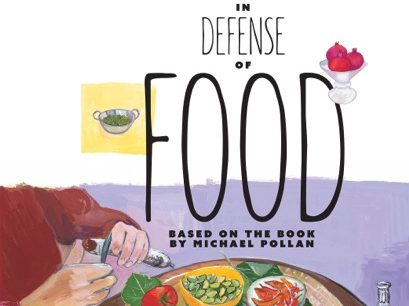 A film by Menlo Park-based Kikim Media, In Defense of Food, will have its Peninsula premiere at the Stanford University School of Medicine Food Forum on October 20th at 7:00 pm. It will be screened at Cubberly Auditorium on the Med School campus.

Explains Michael Schwarz, who who serves as Kikim’s producer and director: “It’s being hosted by Christopher Gardner, who’s in our film, which is based on the book by Michael Pollan. We were thrilled that the film was selected for the 2015 Mill Valley Film Festival earlier this month”

Here’s a brief description of the film:

“Eat food. Not too much. Mostly plants.’ With that seven-word maxim, US-based journalist Michael Pollan (The Omnivore’s Dilemma) distills a career’s worth of reporting into a prescription for reversing the damage being done to people’s health by today’s industrially driven Western diet.

“In Defense of Food debunks the daily media barrage of conflicting claims about nutrition. Traveling the globe and the supermarket aisles to illustrate the principles of his bestselling “eater’s manifesto,” Pollan offers a clear answer to one of the most confounding and urgent questions of our time: What should I eat to be healthy?”