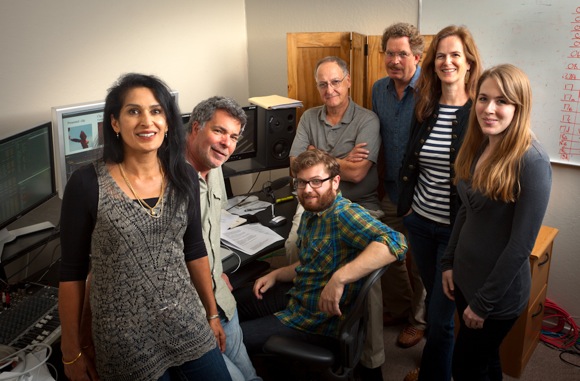 Michael Schwarz started his career in print journalism. Kiki Kapany is trained as an attorney. Together the husband/wife team run Kikim Media, a documentary film production company in Menlo Park that they founded in 1996. “I got most of the name,” laughs Kiki.

Michael’s interest in documentaries began while he was in London in the late 70s/early 80s. “Working for Granada TV, I learned to make films,” he says.

Moving back to the states, Michael made a film, Abortion Clinic, with a friend for the inaugural season of the PBS series Frontline in 1983. It won an Emmy. He won another Emmy the next year for Living Below the Line, also for Frontline. It was a warm welcome to the world of documentary film making.

Fast forward to 1990 when Michael and Kiki met living here in the Bay Area. She was practicing law; he was at KQED. They married and had two children. Balancing work and family life, it made sense to bring her legal and administrative skills to Kikim. “We’re lucky enough to work together on projects that we’re both passionate about,” she says.

Kikim is somewhat unique among documentary filmmakers in that it maintains a core of full-time staff employees, adding free lancers as needed. The company (pictured with Kiki, far left, and Michael, next to her) has produced a number of  films for the Skoll Foundation and Alfred P. Sloan Foundation. “They’ve both been big supporters of our work,” says Michael.

One recent Kikim film (funded by the National Science Foundation, the Sloan Foundation and others) was The Botany of Desire, which brought Michael Pollan’s best-selling book to PBS. It “explores the natural history of four plants — the apple, the tulip, marijuana, and the potato — and the corresponding human desires — sweetness, beauty, intoxication and controlling nature – that link their destinies to our own.” The film won the CINE Golden Eagle Award in the Environment and Natural Science category.

Both living and working in Menlo Park worked well for Michael and Kiki when their two children, who are now in college, were going through school. “I could work on a film and coach soccer the same day,” Michael recalls.

Their latest project, still in the earliest stage of development, will be to explore the history of the area they call their home, the Silicon Valley.

“Our business is challenging,” says Michael. “We can’t offer a big financial return to people or organizations who invest in our films.  What we believe our films instead provide is social and educational value that is hard to match — something that makes a real difference in the world.”