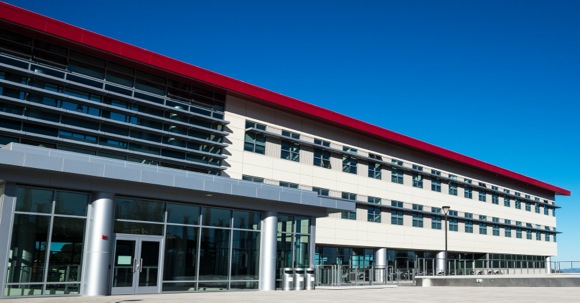 We’ve been watching the new building at SLAC National Accelerator Laboratory go up over the past year, and now that it’s complete, find it quite eye-catching, particularly as viewed going west on Sand Hill Road.

Accompanied by InMenlo contributing photographer Irene Searles, we were given a tour of the first floor and second floor by SLAC External Communications Manager Andrew Gordon, who also provided us with some facts about what’s named the Science and User Support Building. 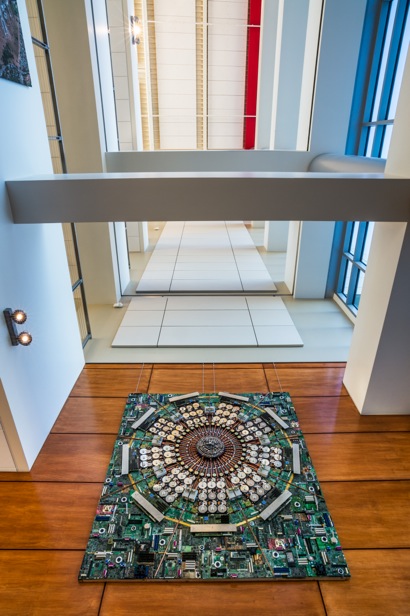 At four stories tall and 62,300 square feet, it’s a LEED green building, certified “gold.” Its sustainable features include radiant floors for heating and cooling, natural ventilation and light. And yes, there really appears to be light streaming in from every which way through an abundance of windows.

The building will serve as a front door to SLAC, including visitor and user badging, international services, and housing. There is talk of pubic tours in the future, and SUSB’s lobby would be the starting point.

That makes sense given the number of exhibits on display. The science and technology wall and touch table show some of the science currently underway at the lab. The interactive touch table features SLAC’s research highlights; up to four people can use it at once.

On the bubble chamber wall, there are artistic renderings based on enlarged images taken during “bubble chamber” experiments. These experiments, which occurred from the ‘60s to the ‘80s, used vessels filled with superheated, pressurized liquid to detect basic building blocks of matter and fundamental force.

The timeline wall displays SLAC’s history, starting in 1961 when the lab was originally conceived and Congress authorized the Stanford Linear Accelerator Center, to the present. 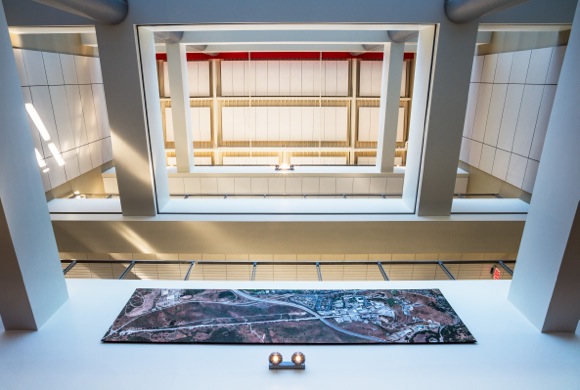 Other visual highlights include models of the accelerator and the klystron, a wall honoring the lab’s four Nobel Prize winners, an overview of the lab’s early days under the first SLAC Director, Pief Panofsky, and a NeXT computer, which is the SLAC computer that housed the first website in North America.

For photographer Irene, our tour was an opportunity to flex her architectural photographer chops. We like the artiness of all the lines and shapes that appear in the photos.

Photos by Irene Searles (c) 2015. The top photo shows the “back side” of the new building, e.g. the side not visible from Sand Hill Road. The second photo was shot from the lobby looking up and the bottom photo, also shot looking up, shows the SLAC site plan at the bottom.