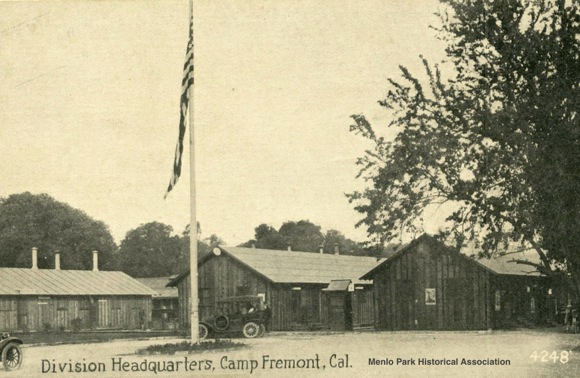 Ninety-nine years ago today (April 6, 1917) the U.S. entered the European war. At the time, Menlo Park was a relatively sleepy country community consisting of a couple hotels, a few businesses (including several bars) and perhaps 2,000 residents clustered around a Southern Pacific train station.

As Barbara Wilcox details in her new book, World War I Army Training by San Francisco Bay, the powers-that-be in San Francisco arranged to have one of the 32 camps hastily set up by the Federal government to train a wartime army located on large portions of Stanford land and in what is now Menlo Park and East Palo Alto. The camp was designed to train an army division (then 28,000 soldiers).

Division Headquarters (photo) was on El Camino Real opposite Ravenswood Avenue. After the armistice on November 11, 1918, the camp was closed and hastily disassembled. But the continuing impact on Menlo Park was considerable. A new downtown along Santa Cruz Avenue emerged, and within a few years the City of Menlo Park was incorporated.

Now a Camp Fremont Centennial Committee is forming to plan appropriate events to remember this important period of local history. The committee, representing organizations in Palo Alto and Stanford University as well as Menlo Park, met on March 23rd with Jim Cogan of the City Menlo Park to brainstorm ideas for the celebration. Several exhibitions are anticipated.

If you have any artifacts related to Camp Fremont — including posted envelopes, postcards, photograph, uniforms or other equipment — that you would be willing to loan for an exhibition, please contact the Menlo Park Historical Association at mphistorical@yahoo.com or call (650) 330-2522 (leave voicemail if there is no answer). In the near future, look for a website, a Facebook page (or group), and possibly a call-in voicemail site for recording oral histories.

Editor’s note:  Barbara Wilcox is having a reception for her book, World War I Army Training by San Francisco Bay: The Story of Camp Fremont  on Sunday, April 10, from 4:00 to 7:00 pm at MacArthur Park restaurant, 27 University Avenue, Palo Alto. The Julia Morgan-designed 1918 building was originally Camp Fremont’s Hostess House.

I’ll be speaking and signing with a bunch of much more distinguished authors Saturday, April 16, 1-5 pm at A Company of Authors at the Stanford Humanities Center on campus. Also want to share today’s review in Roads to the Great War, one of America’s top WWI history blogs.

Actually the U.S. didn’t declare war on Austria-Hungary until Dec. 7, 1917, and never on the Ottoman Empire.