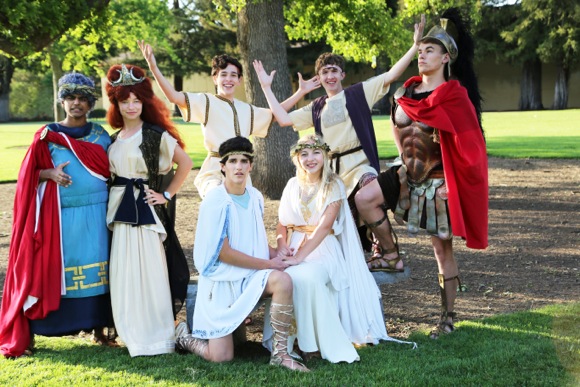 Menlo School Drama is presenting the six-time Tony Award-winning musical, A Funny Thing Happened on the Way to the Forum, on May 6, 7 and 8 and May 12 and 13 at 8:00 pm outdoors in the quad on campus.

The community is welcome to attend; tickets – $10 for adults/$5 for students – are available online and at the gate, which opens at 7:00 pm. Lawn chairs, picnic baskets and blankets are approved, and traditional seating will also be provided. This production is appropriate for middle school children and above.

Forum caps a year of Tony-Award productions staged by the Menlo Drama Department, which also included Avenue Q and The Miracle Worker. This musical romp through Rome is filled with mistaken identities, desperate lovers, scheming neighbors and secrets behind every toga.

Steven Minning, who has staged several remarkable productions since his arrival at Menlo in 2013, believes Forum provides some much needed relief. “Everyone is looking for a good laugh these days, especially in our current political climate, and no musical provides more belly-laughs, line for line, than Forum,” he says. “It’s the perfect elixir for what ails you. My vision is to best share with Menlo students and the community the remarkable spirit of this show with its highly original source material in the raucous free-for-all spirit of vaudeville and combine it with the frisky shenanigans of burlesque.”

In addition to his professional skills and experiences, he has imported another Broadway tradition to the Menlo School Drama Department, one of philanthropy. Each of his last seven productions has been tied to a specific non-profit organization, chosen by the cast, whose work corrolates to the message or themes of the production.

While Forum is a true comedy, the play does deal with freedom and human rights as a central theme. Polaris Project will be the recipient of donations collected. Polaris runs the national sex trafficking hotline for the U.S. and reports incidents of trafficking. It also trains law enforcement, advocates for laws against trafficking and supports survivors.

Menlo senior Lucas Loaiza (pictured center, back row), an active participant in theatre throughout his seven years at Menlo, returns for his final production, playing the slave Pseudolus, a character made famous by Zero Mostel and Nathan Lane. “I am honored to get to star in such a fun and well recognized show, and as a person who loves comedy, I am looking forward to bringing the show to life,” he says. “I am already extremely impressed by the cast we have put together, they are remarkably talented and demonstrate intense dedication to the show, so I’m sure I’ll get to go out with a bang.”

“I’m trying to develop the character with my own spin rather than follow a pattern that I know is already successful,” explains Senior Justin Cardozo of his approach to playing slave-in-chief Hysteriym. “It’s a huge chance I’m taking, and I’ve been pouring my heart and soul into it, but I guess I really won’t be able to say for sure what it’s like until the show is over and done with.”