Frustrated by politics and politicians? Wish you could make, change or repeal a law? John Thibault wants to empower you to do just that.

He started his Menlo Park-based company iLobby a few years back and has just written a companion book, How to Change a Law.

“The focus is on issues and policy, not candidates and politicians,” he explained. “People can debate issues. And if they’re serious, they can come together for crowd-source lobbying. As an example, if 30,000 people put in $20 each, they could hire a top lobbying firm to do the work.” 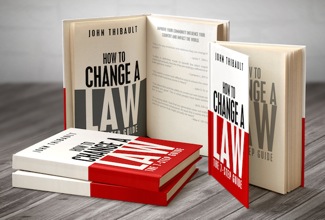 The book will be launched online on May 31 and the first 1,000 people to sign up will receive a Kindle version.

John observed that while we, as citizens, are often aware of Federal issues, we are less informed about local and state issues. “Our goal is to put the pre-legislative debate in public at all levels.”

The purpose of the book is to provide actionable tools and strategies that are easily implemented. He cited three components: message, mass, and money.

“By that I mean the clarity of the message, a mass of people who form an ad hoc coalition, and the resources to implement the campaign,” he explained. “Put it all together, and we can be the Costco of lobbying!”

John arrived at the idea for iLobby through a somewhat circuitous career path. After graduating from UCLA with a masters in film and business, he worked on the creative side of the film industry. Then, in the early 90s, he was on the governmental affairs staff at MCA Universal.

“I watched how Lee Waserman [head of MCA] worked,” he said. “He was the godfather of Hollywood, close to both Democrats and Republicans. From him I learned that business can’t afford to ignore the government but rather executives in corporations at the top of their game worked with government, trade groups and lobbyists to effect policy change, and then ultimately bills and laws.”

After spending some time in Boulder — “it was like being in the 50s,” he recalled — John realized that he wanted to get to one coast or the other and, as he related, he “stumbled on a little auction company that was just starting up.” That company became eBay.

Following a stint at Financial Engines, he came to the realization that he didn’t “want to work in a regulated company” and that eventually led to iLobby.

More recently, he’s been involved in running campaigns for various Atherton city council members. “It was a good experience; we won every race,” he said. “As I was talking to people, I learned how frustrated and beaten-down they felt in relation to politics. iLobby was formed to empower people.”

He’s hoping that a combination of the new step-by-step guide and iLobby will be what wakes America up to take action. As he writes in the preface of the book: “I wrote this book so that you can begin to improve your community, influence your leaders and impact the world.”