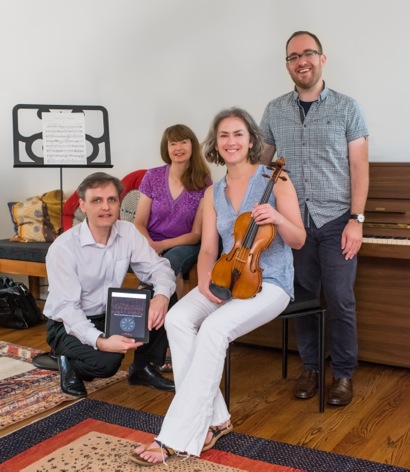 Combine a pianist with a violinist playing music by English “Impressionist” composer John Ireland in concert with active participation by the audience using Sensemo and you get the world’s first experiment in live music, art and hi-tech. That’s the promise of Sight and Sound, which will be performed June 18 at 7:30 pm at the Community School of Music and Arts at Finn Center. Tickets are available online.

The concert is very much a Menlo Park endeavor, spearheaded by resident Hazel Keelan (the violinist) and her neighbor Peter Ebert (the technologist) aided by his wife, Anya, along with Justin Schrum (the pianist) whom Hazel met at Veksler Academy.

Hazel has long been interested in both inspiring more people to come to classical concerts as well as the intersection between music and art. “It’s inspiring to bring together different elements in one concert and see what happens,” she says. “I believe it’s time to revisit the concept of performer and listener to reach more audiences.” 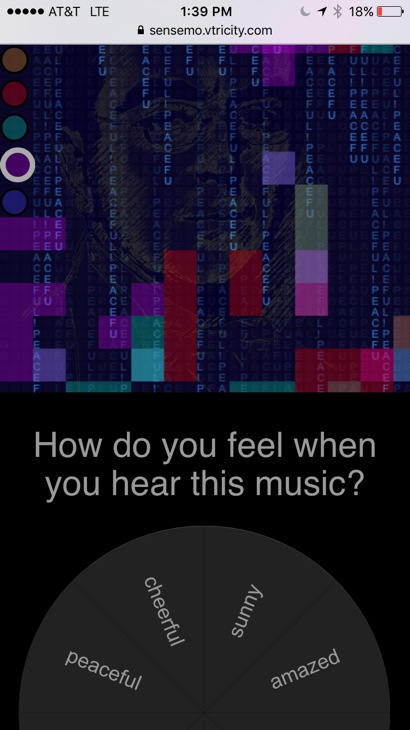 Peter, who is CEO of Menlo Park-based vtricity, refers to Sensemo (right) as “the world’s first instant emotion feedback cloud.” Concert goers who bring along their charged tablets and smart phones will be able to react in live time to how the music they are listening to is making them feel.

“We view it as liberating people to talk about their feelings,” he says. “The artists on the stage will know how the audience feels. Emotion will be visible in the room.”

The program will include John Ireland’s two piano compositions, Piano Sonata in E minor and Three Pastels as well as the Violin Sonata in D minor. There will also be live digital painting by local digital artist Caroline Mustard.

“In this concert I will be exploring my synesthesia [seeing colors in music] in John Ireland’s music,” says pianist Justin. “Through projection you will be able to experience the colors that I see and digitally provide your emotional response using Sensemo.”

All the participants hope that the concert is approachable even for people who never would have thought they’d enjoy classical music.

“We are also going to respond as we play,” says Hazel. “And while the conversation during the performance will be through technology, we hope to have conversation among people during the intermission.”