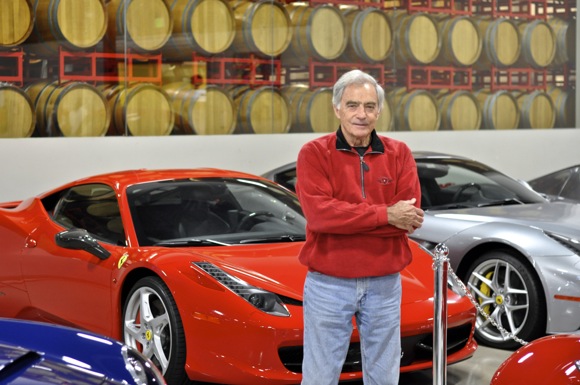 Dick Burns grew up on Middle Avenue in Menlo Park in a house built in the 1940s. Born in Argentina, he came with his family to the Bay Area when his father, who was in his 60s when Dick was born, retired.

“I spoke Spanish before English, and the kids would chase me around Fremont School because I had an accent,” he recalls.

Dick left his mark on Menlo, not only as an athlete at Menlo-Atherton High School where he ran track, but also indelibly in the backyard of his boyhood home. “A few years back I knocked on the door and asked to look around the place,” he said. “My initials are still in the concrete in the backyard!”

After attending the University of Colorado on an athletic scholarship and a stint in the Air Force, Dick came back to his hometown and somewhat impulsively bought a 1963 Porsche, which he still owns. That may have portended one of Dick’s latter in life pursuits — partner in AutoVino in Menlo Park.

That came after a career in the restaurant and food service industry based in Southern California. Along with another M-A classmate and two others, they operated over 30 Cask ‘n Cleaver restaurants beginning in the late 60s through the early ’80s. He then ran operations for Todd’s Foods, which provides soups, sauces and salad dressings to restaurants.

When Heinz bought Todd’s in 2001, Dick stayed on for another three years. “It was my first time working for a public company,” he says. “We did well, growing revenues to $75 million. We parted ways — they told me I was too entrepreneurial — but I thoroughly enjoyed learning how a public company thinks.”

Dick’s wife died of pancreatic cancer in 2005 when their son was in 8th grade. “That led me to my Mr. Mom period,” he says. “I found it difficult. I was so used to having a place to go to every morning.

“It took me two years to unwind from corporate life. But one morning, I realized, hey, I don’t have to go anywhere! It was an incredibly freeing feeling.”

While in Southern California, Dick had gotten to know Woodside Winery owner and AutoVino partner Buff Giurlani, whose family started Star Brand Foods. “We’d heard about a concept similar to AutoVino down south and decided to do something similar here in Menlo Park,” recalls Dick. “We opened in 2009, and the economy collapsed right after. But we persevered and now have a second facility in Redwood City that’s devoted solely to automobile storage.” [Woodside Winery is the “vino” part of AutoVino, also owned by Dick and Buff.]

We’d met Dick at AutoVino where he was hanging out with some of the M-A classmates he remains close with to this day. “I have a great group of friends,” he says. “We get together every year. Our wives and girlfriends say, ‘You guys tell the same stories over and over.’ Now that we are older, there’s even a stronger resolve to stay connected. We agree that growing up in Menlo Park was just great.”

We love Auto Vino! It is so fun to wine taste there and have their fabulous wood-fired pizzas.

Enjoyed the update. Not sure if you remember me because you were a year ahead of me at Menlo Atherton but I was happy to read of your success!
Kudos!
Ricci

He Dick glad to here you’re back in the area. I think I met your partner Buff, downtown a couple of years ago. Talked about cars. I still see Joe every once in awhile.

Thank you for the article about Dick Burns. He’s important in my life in Menlo Park because, unless my memory fails me, which it may do, his mother was a nurse. She helped me survive a lonely experience at Stanford Hospital when I had surgery at 12 years old. I was forever grateful to her. Dick’s family lived only two blocks from our home on Poppy Avenue. Which brings me to a minor quarrel with the article. My recollection is that Dick and his family lived on Olive Street, not Middle Avenue, right at Oakdell Street. Dick was something of a hero to me because of his athletic prowess. When I ran the 220 at MA in gym class, I threw up. I also admired Dick’s Cask and Cleaver and his entrepreneurial skills. I certainly agree with his sentiment that growing up in Menlo Park was great. I appreciate that now more than I did at the time.