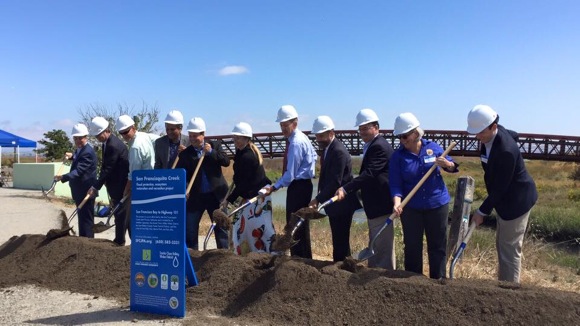 Those who grew up in Menlo Park may recall when San Francisquito Creek flooded around in 1995, which it did again in the winter of 1997-98. In that rainy season, it swelled to just under the bike/pedestrian bridge near the Stanford Golf Course across from Oak Avenue in Menlo Park and in unincorporated Menlo Park along Alpine Rd.

The current project includes excavating decades of sediment built up in the channel, new flood walls where private property constrains the channel, widening the channel by building a new levee through the Palo Alto Golf Course, and rebuilding the existing levee adjacent to East Palo Alto homes.

Construction will last for approximately two and a half years, with most of the work limited to June through January to protect endangered species in the area.

Commented Assemblyman Gordon, who lives in Menlo Park: “The project was many, many years in the making.”

The project is a partnership among the SFCJPA and its member agencies, which include the cities of Menlo Park, Palo Alto, and East Palo Alto, the San Mateo County Flood Control District and the Santa Clara Valley Water District. The Water District will administer and manage the construction of levees and floodwalls.