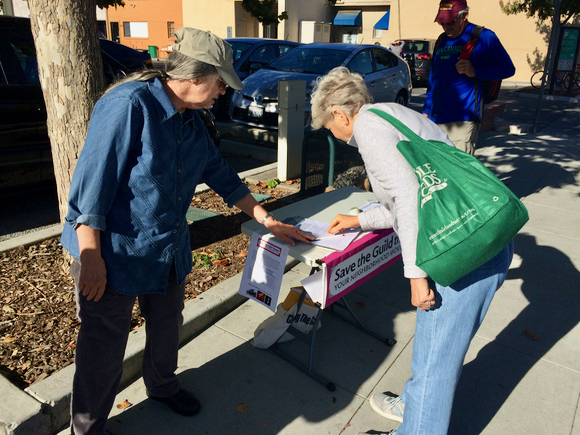 Across the street from the Farmers Market this morning, Menlo Park resident Judy Adams (left in photo) was gathering signatures to save the Guild Theater, which she recently discovered was on a month-to-month lease.

“Having an old single-screen movie theatre in Menlo Park – which once had three – may be considered a cultural dinosaur, what with video streaming and big-screen multiplex theaters with 3D and reclining seats, but I’m finding lots of residents who cherish our old Guild,” she told InMenlo via email. “I find it easier to park at the Guild than at the Aquarius in downtown Palo Alto, despite having its own parking lot. Spruced up, I think she has years to go and is beloved by many.”

The theater, which is operated by Landmark Theatres, has been in Menlo Park since 1926, celebrating its 90th anniversary this year. InMenlo captured some of its history in a 2011 post. Howard Crittenden, owner of the Theatre, confirmed to the Palo Alto Daily News that he’s been looking for a buyer for the past year without success.

“The Guild needs renovation (new ADA bathroom, projection equipment, seats, air conditioning), but I’d strongly urge maintaining elements of its distinctive interior light fixtures and the “wings” on the side walls (I understand from old theaters in San Francisco), retaining the funky, loveable flavor of our intimate 300-seat theater,” Judy wrote on the Almanac’s Town Square.

Besides gathering signatures at the weekly market, Judy has an online petition. She’s also written to the Menlo Park City Council and the Planning Department, and, for good measure, to Facebook CEO Mark Zuckerberg to see if he’d be interested in being an angel investor.

“I’m new at this, and am in contact with people at Imagine Menlo who have explored possibilities of saving the theater,” Judy explained. “When we get more signatures on the petition – and the elections are over – I hope we’ll be able to make a better case for the importance of saving the Guild to the owner, the city, and Landmark.”

Save these small theaters!

I live in Menlo Park and attend the Guild often. It is intimate, offers quality features, and is the only movie theater in Menlo Park. Without it we have to travel to Palo Alto or Redwood City. It is close to Menlo Park restaurants and is close to parking so encourages having a meal after the movie. Please maintain it as an important part of our city life.

Save these small theaters!

Unbelievable that you all would attempt to stop a property owner from selling one of their assets. This is America, correct? If you want to save a business or structure, buy it or shut your collective mouths.