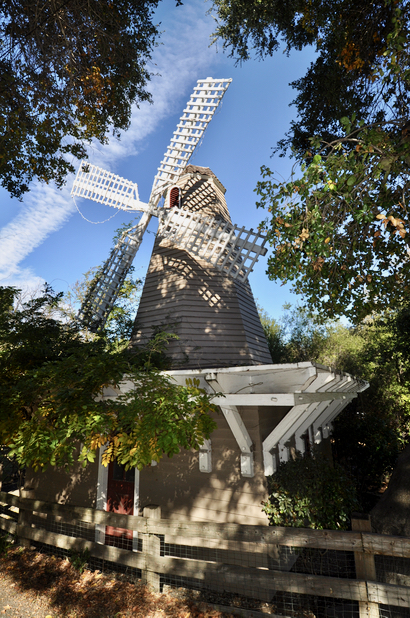 Everyone who travels on Portola Road in Portola Valley notices the whimsical windmill that has stood on the corner of Georgia Lane for 99 years. Some probably know that it isn’t really a windmill; rather it’s a structure placed atop a well by William Fitzhugh, the owner of an estate called Catoctin, today’s Grove and Stonegate.

But few know that a Portola Valley institution had its beginnings right beside that windmill 60 years ago. That institution is the Windmill School. Ever wondered why it’s called Windmill? Now you know. Since the preschool is soon to begin anew chapter in its evolution, this seems a good time to tell its story.

It was in the 1950s, most probably 1956, that Irma Scheller, a young mom who lived on Wyndham, decided to open a preschool in the little house that stood beside the windmill. The house wasn’t in very good shape, and it was a simple beginning for the school she called Windmill Day Nursery School. Among its features were a six-foot long green fiberglass dinosaur and a tan four-foot tall horse with a white mane.

Mrs. Scheller probably didn’t know that the very site where she started her preschool had been the home of the Corte Madera Brewery in the 1870s.

She ran the school until 1969 when the land with the house was purchased by Sharon and Dennis Reichardt. They ran the school for a few years, and in 1974 hired Joan Barksdale from the renowned Bing Nursery School at Stanford to be the director. Learning through play continued to be the school’s philosophy.

Since the house was small, and since our climate is what it is, much of the program was outside — walking through the nearby orchard, looking at the creek that was right there, playing with the goat, gathering eggs from the chickens, and watching the sheep being sheared every year. The garage was on a slab, and that’s where the easels were set up for art. There were ten or 12 families who all became good friends.

When the Reichardts decided to sell the property in the mid-1970s, the families of Windmill wanted the preschool to continue. By then about 70 children were enrolled. Possible sites were few, but the little stone building on the Alpine Hills Swim and Tennis Club property that had served as the Town Hall was empty.

The group created a non-profit corporation with a volunteer board of directors. They raised money, came to an agreement with Alpine Hills and the Town, donated hundreds of hours of physical labor to get the building and grounds ready, and moved the Windmill School into new quarters in 1977.

The families probably didn’t know that before their preschool became the Town Hall, the building had been Eugene Kelly’s saloon in the teens and twenties and later the center of the Manginis’ Picnic Park until 1958, a spot where many a glass of beer had been quaffed. Their historic bar is featured in the swim and tennis club today.

It turned out to be a good fit. At first a maximum of 21 children from ages 2 1/2to 6 were allowed at any one time, with up to three teachers. The youngsters could participate in a tennis camp and a swim program in addition to the regular learn-through-play curriculum.

Now we come to the present. The little stone house is really too small for the kinds of programs that families in the local community would like to have. And the swim and tennis club needs the building. So the search for new quarters has been on. Options aren’t much greater today than they were in the mid- ‘70s.

After a long, diligent search, the board of directors purchased the Al’s Nursery site, 900 Portola Road, in 2015. Karin Wu, the daughter of Al Bertschinger, who had been running the nursery up until 2011, loved the idea that “my family’s nursery for plants would become a nursery for children.”

When the new buildings are ready, in the fall of 2017,Windmill will be able to expand its programs — morning classes for all preschool age groups, a Young 2s class, extended programming for preschoolers, and enrichment classes for elementary school students. The tradition of play-based learning for all the community’s preschoolers will be enhanced and extended to elementary school children and their families, and the school will, for the first time in its 60 years of existence, have its own home.

And those families that established the non-profit preschool in the 1970s? They established personal bonds, went onto play many leadership roles in the schools, and remain good friends today. And now that tradition can continue for generations.

Author Nancy Lund writes frequently about Portola Valley; this article originally appeared in the PV Forum and is used with permission