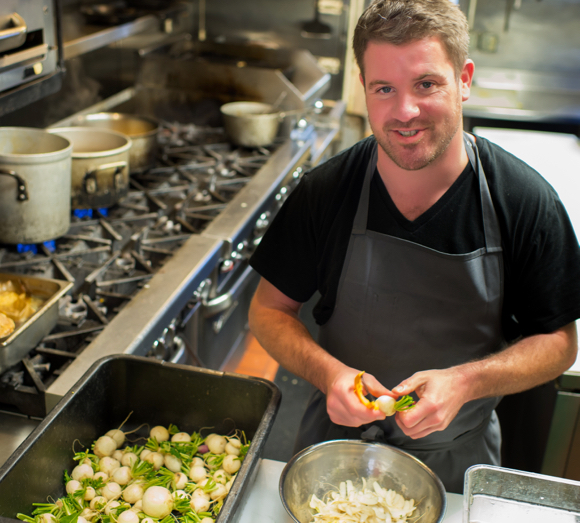 Growing up in Menlo Park, Charlie Parker would walk with his parents and siblings to Flea Street Cafe. “I remember some of [owner] Jesse’s signature dishes from the time I was 12,” he said. “Like ‘which came first the chicken or the egg’ and the sardines. There was always a good salad and a warm dining room.”

After graduating from Woodside High School, Charlie attended the California Culinary Academy and has gone on to work at notable restaurants throughout the state. Now he’s back in his old ‘hood working for Jesse Cool as Executive Chef at Flea Street.

Cooking is something he always liked to do. “I started cooking for my family when I was in sixth grade,” he said. “My grandmother was southern and a good cook. I’d come home from school and watch Great Chefs, Great Cities. And, as a sophomore in high school, I helped John Bentley out when his restaurant was in Woodside.”

During his years in the kitchen, he’s gotten to work with some of the best chefs in the world. “David Kinch, Ron Boyd, Daniel Patterson and Jeremy Fox are my mentors. They taught me the importance of staying true to your craft, cooking seasonally and locally, and enjoying what you do,” he’s quoted as saying on the website, Culinary Agents.

He found his way back to his hometown thanks to a chance encounter his mom had with Jesse at Bianchini’s in Portola Valley one day. “Jesse told my mom that I needed to call her,” he said. “I was at Alfred’s Steakhouse in the City at the time but thinking about other options. When I got together with Jesse, I knew I couldn’t pass this opportunity up.”

The Flea Street menu now reflects Charlie’s talents and style. One innovation is a monthly wine cellar dinner that pairs some of the older and best wines with a four-course meal. The next is scheduled for Feb. 22; there is also a special menu and wine pairings planned for Valentine’s Day. Both can be reserved by calling 650.854.1226.

“Coming to Flea Street as a kid kindled my desire to cook,” he said, adding with a smile, “and now here I am!”

Congrats Charlie We got to catch up sometime