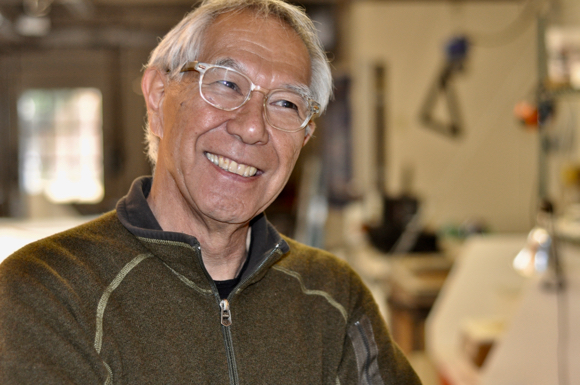 Given his robost portfolio of private and public glass art, Menlo-Atherton High School alum Alan Masaoka surprised us: He didn’t go to art school nor even study art at either M-A nor the College of San Mateo. During a recent visit to his Carmel Valley studio, he explained:

“I’ve always been interested in art and was good at drawing and sketching. It just seemed natural to me. But it wasn’t something I worked at.

“At M-A, I could’t read well and wasn’t good at math. To make my way, I sort of hid out. Later I’d find there was a diagnosis for my learning disability: I was dyslexic.

“I never went to art school. My mother always said, ‘You don’t want to be an artist because you’ll never make any money’.” 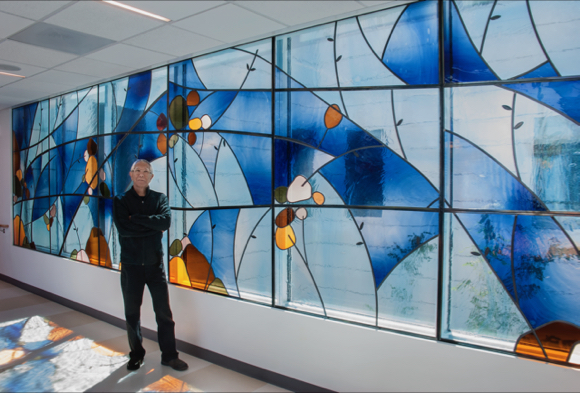 After a stint as a Vista counselor in Appalachia, Alan married a woman from Woodside, and they searched up and down the coast for a place to live, eventually settling in Seattle.

“It was there I fell into art,” he said. “I got caught up in the glass art movement led by Dale Chihuly, who became my mentor. I studied with him along with probably the best stained glass designers in the world.  I opened a glass studio accepting commissions for private homes and public art. There were probably more glass artists in Seattle then Murano [Italy] at the time!”

A grade school like the one he attended (Encinal in Atherton) led him to Carmel Valley. “Plus, the area was well off, leading to private commissions for homeowners in Pebble Beach and surroundings,” he said. “And the Bay Area was close enough.”

Alan’s stained glass is contemporary rather than traditional. “When I started showing in galleries, I set up in an unconventional manner, putting port holes into walls that when looked through would reveal my glass windows back lit,” he said. “The commissions just started falling from the sky.”

Alan’s most recent public commission was a piece for the new San Francisco General Hospital. “I received an email asking if I wanted to be a finalist, which was really surprising as usually you have to submit your proposal, they don’t call you.

“I was selected and got familiar with the site where the art work was going to be displayed. Quite often, I walk along the Carmel River, and it occurred to me that water, with its healing effect, would be perfect for the hospital.

“I used hand-blown glass, almost like water. The light comes through the glass and reflects upon the floor, so patients and their families can have the experience of walking through water.

You can see more of Alan’s work on his website .

Photo of Alan (top) by Linda Hubbard (c) 2016; other photocourtesy of Alan Masaoka.

truly amazing. I am not an artist in any way shape or form, but excelled at math and science, hence, ended up in science. i admire any and all with this kind of talent

So great to read about your inspiring glass work. I would love to tour your studio sometime. Do you ever have Open Studio?

Your work is gorgeous. Ed and I also would like to tour your studio.