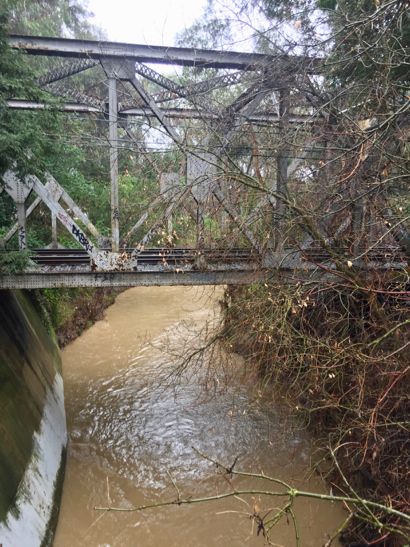 Afternoon update for Bill: “White clouds and some blue sky now. The storm seems to have passed through, after one last deluge late morning, which produced another .1″ . My season-to-date is now 24.45″, my highest in years.”

Besides down wires and fallen trees, one of which took out a power line, the threat of a potential blockage due to a build-up of debris under West Bayshore Road because of a broken metal “trash rack” along San Francisquito Creek was averted Thursday night, according to Menlo Park Fire District Chief Harold Schapelhouman.

The rack is a protective set of metal barriers that prevents large debris from passing under West Bayshore, Highway 101 and East Bayshore Roadways, as Caltrans works to complete this multi-year creek undercrossing and improvement project.

Tuesday’s record making flows on San Francisquito Creek, at 4820 cubic feet per minute, were the 6th largest since annual recording started in the 1930’s. But it wasn’t until the waters started to recede on Wednesday that officials noticed that one of the three barriers had dislodged and was now jammed up under West Bayshore Roadway, creating not only a “strainer effect, but also an unforeseen and difficult retrieval situation because of its location under the roadway structure.”

Thursady’s peak flow reached 1790 cubic feet per minute at 5.16 pm, but officials remained vigilant until 9:oo pm. Menlo Park Fire District Captain Tony Eggimann and Engineer/Medic Matt Menard flew one of the Fire Districts newest UAS/Drones  in order to document and capture video footage of the damage and debris, so others in the Creek Joint Powers Authority could directly see the problem.

Caltrans has committed to coming up with a retrieval and repair plan by Monday, February 13th, and local officials are anxious to see the opening cleared and repaired before the next set of winter storms is scheduled to enter the Bay Area late next week.