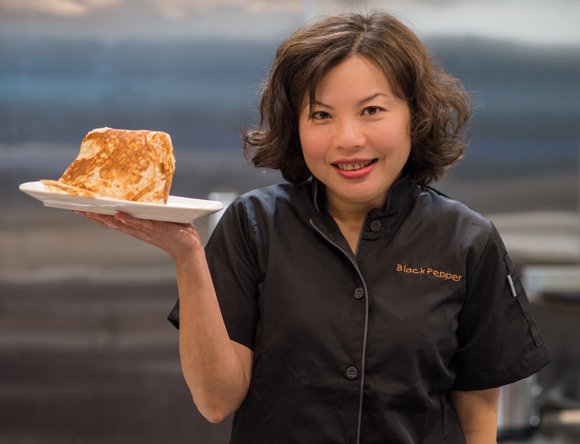 A funny thing happened to chef Kay Tan on her journey to open a second Malaysian restaurant. At her new Menlo Park location, she’s now more frequently in the front of the house while her husband, David Yim, does the chef duties.

Their new Black Pepper restaurant, in the former and completely remodeled Menlo Hub space, opened in early March and features Malaysian food with a sprinkle of Thai and Chinese dishes. It follows Banana Leaf, the restaurant they’ve operated in Milpitas for the past 18 years.

Kay’s story is one of an immigrant. She arrived in the U.S. 30 years ago, with San Francisco the first stop. She took ESL classes in high school and went on to San Francisco city college and San Francisco State before joining the workforce in high tech.

“But I always loved to cook and enjoyed the hospitality of serving people,” she said. “I was working at a computer company and one day told my husband, ‘I’d like to have my own restaurant.’ And he was willing to support me with all the money he had.”

Kay taught David to cook. “He’s from Hong Kong, so this is not his cuisine,” she said. “Now he doesn’t listen to me anymore, he’s that good!”

She describes Malaysian cuisine as “complicated to make.” “We are so picky. We want to do things in a particular way. It’s time consuming.”

Kay learned to cook from her mother. “She’d come to Banana Leaf and go back home and say ‘Banana Leaf is better!’ That made me proud.”

Black Pepper is open for lunch and dinner Monday through Saturday; closed Sunday.

Photos by Irene Searles (c) 2017; the collage was shot while Kay was making roti