When Menlo Park resident Adam Stern was in 5th grade, he heard about the inaugural Earth Day being held on April 22, 1970. “I asked my teacher if I could go to the Washington Mall and attend,” he recalls. “I still have the poster from that event. It was in my room when I was a child, and it’s now in my office.”

That was just one seed of Adam’s environmentalism. He also got involved in some projects while at high school, going to West Virginia to stop strip mining. “That helped me to see the potential of organizing and fighting something that was bad for the environment,” he says.

Then while at Yale, Adam’s primary extracurricular activity was working to create the Connecticut Fund for the Environment. He came west to attend Stanford Business School where he received an MBA. 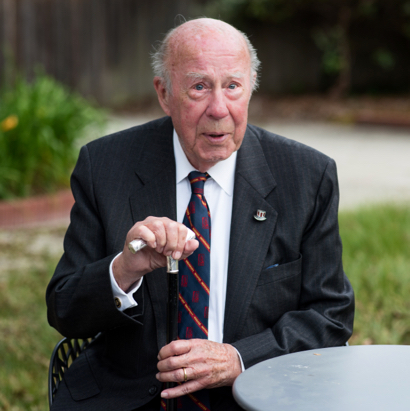 Today Adam (pictured top right) is Executive Director of Acterra, a Bay Area environmental organization based in Palo Alto. “We work with national environment groups to fight the worst threats to our nation’s environment along with supporting relevant state legislation,” he says. “But at the same time Acterra is focused on the local actions that are so vital in protecting our land, air and water. For example, we are urging the release of federal government funds that will electrify Caltrain. That would dramatically reduce air pollution, create jobs and cut down on traffic.”

Earlier this month, Adam hosted former Secretary of State George P. Shultz (pictured with Adam and above) as part of the organization’s spring public lecture series, a gathering that attracted several hundred people. The Secretary, who has more than 70 years of public service, starting as an economic advisor to President Eisenhower and serving in four cabinet positions under Presidents Nixon and Reagan, explained why he thinks a revenue-neutral carbon tax and dividend plan will help curtail climate change.

Writing for Acterra, Debbie Mytels, the non-profit’s Energy and Climate Program Director, explained: “As a founding member of the Climate Leadership Council, in February, Shultz joined other prominent Republicans in issuing The Conservative Case for Carbon Dividends, a proposal similar to a plan promoted by the Citizens Climate Lobby in recent years. The plan would enact an initial tax of $40 per ton of carbon emissions, charged at the extraction site or port of entry for imported fossil fuels. The tax would increase each year, incentivizing energy efficiency and the use of carbon-free energy such as renewable solar and wind power.

“To build a political coalition for a carbon tax, Shultz suggested copying Ronald Reagan’s strategy in winning approval for the 1987 Montreal Protocol to protect the ozone layer. Convinced that scientists were right about the dangers of ozone depletion, Reagan confronted skeptics by reminding them that they all had fire insurance, even if they knew chances of a house fire were slight. Similarly, Shultz said, ‘Let’s take out an insurance policy to protect against the risk of climate change’.”

Adam said he’s gotten to know the Secretary over the past few years, initially in 2010 when Shultz co-chaired the campaign to stop Proposition 23, the ballot measure that would have rolled back the California Global Warming Solutions Act (AB32) . “I’ve stayed in touch with him and invited him to other functions,” he said. “The Secretary is knowledgeable, charming and wise. By cultivating relationships and good connections, he has that rare ability to help people understand complex subjects.”

The next Acterra public lecture, Flying the (Climate) Friendly Skies: Sustainability @ SFO with Erin Cooke, is scheduled for Thursday, May 11, from 7:30 to 8:30 pm at Microsoft’s Mountain View Campus, 1065 La Avenida, Mountain View.