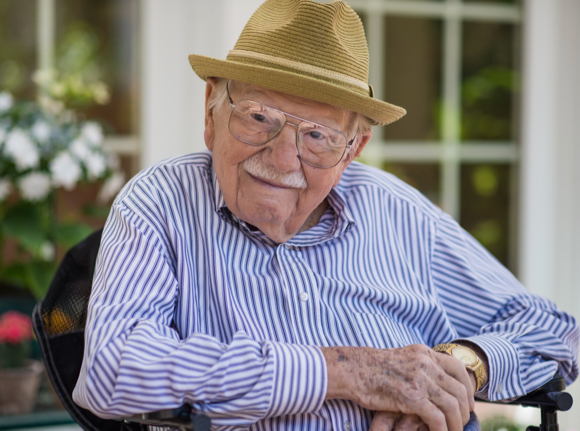 We had the pleasure of visiting with Arthur Flegel in advance of his 100th birthday, which will be marked with a gathering of some 80 family and friends on August 6.

The man who, along with wife Cleora, brought furniture to downtown Menlo Park with the opening of Flegel’s Home Furnishings in 1954, is in somewhat frail health now, but clearly enjoyed a brief visit and photo session. “I’m so lucky to be in a community like this,” he said.

We were at his home with the youngest of Art’s three sons, John Flegel, who was able to fill us in on some of the details of his father’s long and full life.

It was with clothing, not furniture, that Art had his first business success. His bio explains: “After graduating from Loveland High School [Colorado], Arthur worked at JC Penney full time, and in 1937, at the age of 19, he was transferred to Stockton, California, where he moved with his mother and younger sister.

“There he assumed management of the shoe department and in 1940 advanced to the men’s clothing department. The following two years he was the second highest salesman in individual dollar sales volume in the entire chain of JC Penney stores.”

Arthur met Cleora while in Stockton and they were married in 1940. John has two older siblings, Robert and Mark. The latter took over the management of his father’s store in the early 90s.

John noted several other things, which may not be widely known by today’s generation of Menlo Park residents. During the 1960s and 1970s, under the auspices of the Menlo Park Presbyterian Church and the World Council of Churches, Art chaired the resettlement committee of the church and assisted more than 200 refugees from China, Korea, Germany, Indonesia, Cuba and Vietnam to resettle on the Peninsula.

Art got interested in genealogy in the 1960s.  In 1968, he was instrumental in the creation of the organization known as the American Historical Society of Germans From Russia (AHSGR), which principally concerned the emigration of Germans from their homes in Germany to Russia and their subsequent immigration to the United States.

He amassed a substantial library of source materials based on his own research, library studies and extensive travels. In 2014, Art’s personal library was donated to AHSGR and is now preserved as the Arthur and Cleora Flegel Library in Lincoln, Nebraska.

“This is so nice,” he complimented his visitors. Even nicer is a life lived as richly as Arthur Flegel’s.

My father, Ewald Matutat, a long time Menlo Park resident, investigated his family genealogy and connected with AHSGR and perhaps also Arthur Flegel. Dad’s parents emigrated to New York from a community of Germans in Lithuania. My Dad was clearly pleased to find both AHSGR and the connections with a greater emigrant community. As a family, we too appreciate Arthur Flegel’s contributions and are pleased to hear that the Flegel and AHSGR documents are preserved in a library archive!

Interesting seeing this article, I went to went to Fremont Elementary School with John Flegel back in the early to mid 50’s. I think we were in the third grade together, my how time flies!

What a lovely dear old man!
Beautiful picture. Thank you for this article.
I love to be subscribed to your news.
Celeste

Nice to get update on Arthur Flegel.
Grateful for his work in our history which I personally share cr Rd