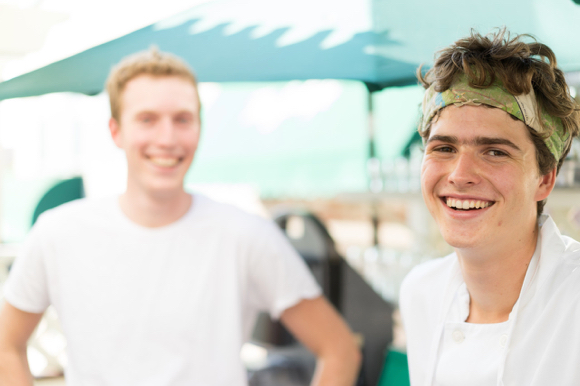 Editor’s note: This is the fourth in a series spotlighting the special features of local restaurants that may not be obvious or well-known. If you think one of your favorite Menlo Park restaurants qualifies, please email us at tips[a]inmenlo.com.

While not an employment criteria, there does seem to be a trend for servers and chefs at Jesse Cool’s Flea Street Cafe in Menlo Park: They grew up eating at the restaurant. 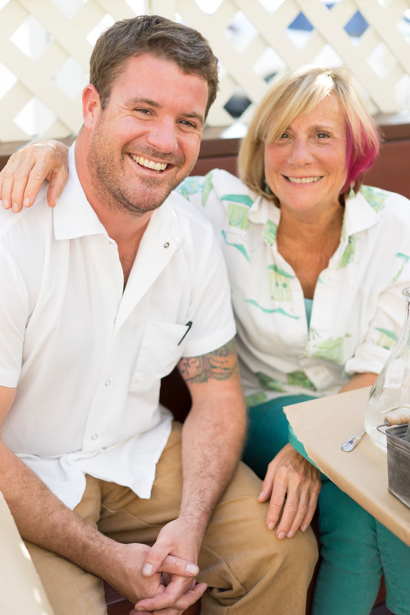 We’d stopped in to experience the newly-opened Oysterette, the brainchild of Jesse and Executive Chef Charlie Parker who grew up eating at Flea Street (pictured right). It’s located on the freshly painted and decorated deck in front of the restaurant. Serving customers is Zach Wurtz and shucking oysters and preparing small plates is chef Leo Wurtz (pictured top with Zach in background). And yes, the brothers grew up eating at Flea Street.

“While I don’t want to think of myself as an elder, I’m learning to embrace the fact,” said Jesse. “It’s so great to see the young people come in and understand the core values and philosophy of Flea Street, which turns 37 on August 28.

“That’s a lot of years for a restaurant and a cause for celebration. So how great is it that this next generation is so caring and respectful. And they really like their jobs!

“One of the exciting things about having Charlie come home is that he’s endlessly inventive while being very aware of the business that I built over the years.” 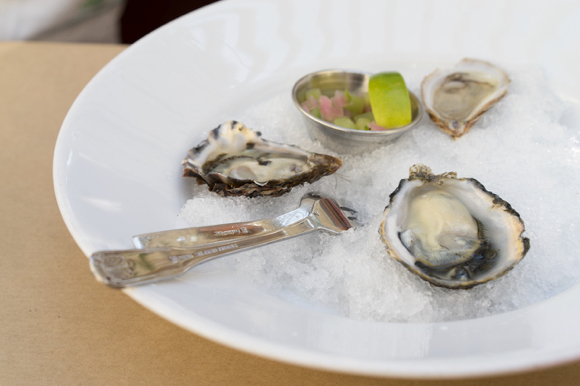 Jesse explained that Leo has been working at Flea Street since high school. The brothers spent some time traveling the world and have now landed back at their hometown restaurant. “Some chefs go from place to place to learn,” she said. “I stayed in one place and everyone came through and I learned from them. Leo came back to a place where he’s learning a lot.”

The menu at Oysterette is distinct from what’s offered inside Flea Street and includes fresh-from-the-garden salads, some of which are whimisical: how often have you eaten a salad that’s hand-shaken in a jar? 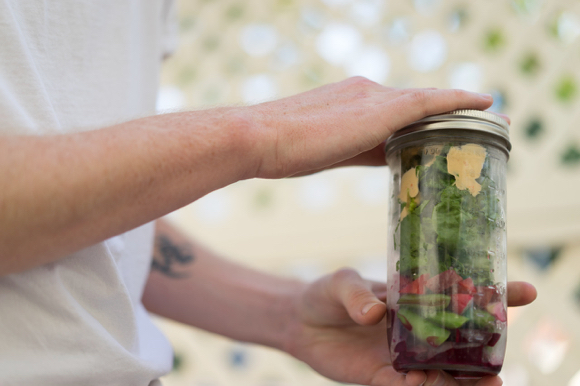 Of course there’s a changing variety of East and West Coast oysters. But for those who are not fans of the bivalve, there’s a great selection of interesting small tastes including avocado toast with smoked trout as well as serrano ham with burrata and stone fruit, to name two.

Beverages include a selection of California wines along with four craft beers and made-on-the-deck special cocktails.

The casual theme continues in the first-come, first-served, no reservation policy. Added bonus for canine owners: Oysterette is dog friendly. It is open Wednesday through Saturday starting at 4:30 pm.