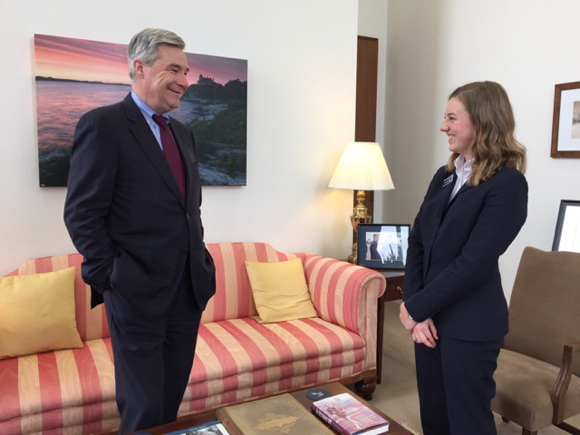 Editor’s note: We visited with Holly Newman, now a M-A senior, before she left for Washington, D.C. last winter to serve as a Senate Page. Home now, we caught up with her to hear about her experience in the nation’s Capital.

Holly left Menlo Park last January excited to get a taste of politics. What surprised her was the schooling that went along with it.

“Academically, it was very hard,” she said. “School was very rigorous, starting at 6:00 am. The professors all expected immense achievements from us. They made it clear that it was a privilege to work as a Page but doing our school work was always the emphasis.”

That’s made her transition back to a regular high school “a little strange,” but she’s happy with her course load and focused on what’s ahead, that being graduation and college. “What’s great about M-A is that it’s a microcosm of the whole world,” she said. 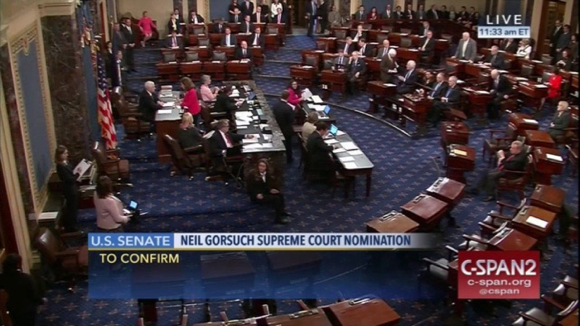 Holly was on the Senate floor during the debate on Judge Neil Gorsuch’s nomination to the Supreme Court, and observed that it seemed like all the Republicans gave the same speech as did the Democrats. “But then I found myself taking the final vote tally standing right next to the Vice President. I was in the thick of it! So much had happened in such a short time.”

While she had one really terrific meeting with Senator Diane Feinstein, who had sponsored her Page application, it was Senator Sheldon Whitehouse from Rhode Island who she got to know a bit.

“His book, Captured: The Corporate Infiltration of American Democracy, came out in February and I read it and found myself really admiring him. He had an early morning session called Wake Up Wednesday; it was a floor speech he gave every Wednesday night right before the Senate adjourned. I went every time. He’s fantastic!”

This summer, Holly’s involvement in politics continued doing an internship focusing on economic policy analysis with the State Board of Equalization arranged through Fiona Ma. Now she’s working as a communications intern with Steve Westly, the former State Controller, at his VC firm.

And though her meeting with Senator Feinstein was not lengthy, it has stuck in her mind. “Someone took photos and we chatted a little bit. I was turning to leave when she said, ‘So what are you going to do with your life?’ We talked about college and study and what I wanted to be. She is so sharp — whip smart. I admire her for her strength.”

Photos courtesy of Holly Newman, showing her with Senate Whitehouse (top) and on the Senate floor; she’s standing on the far left holding the clipboard and the Vice President is in the chair talking to the Parliamentarian in the red jacket