Stand on the upper floor of Ellis and Ron Bigelow’s home in Menlo Park and one thing immediately comes to mind: You’re not in a house but rather a treehouse.

Indeed, trees played a large part in how the house, which the Bigelows moved into in late 2013, was designed. Ron recalls:

“One of the dramatic (and constraining) features of our new lot was that it featured five large Heritage Trees, four in the front of the lot, and one right behind the living room of the existing older home that was sitting on the lot. 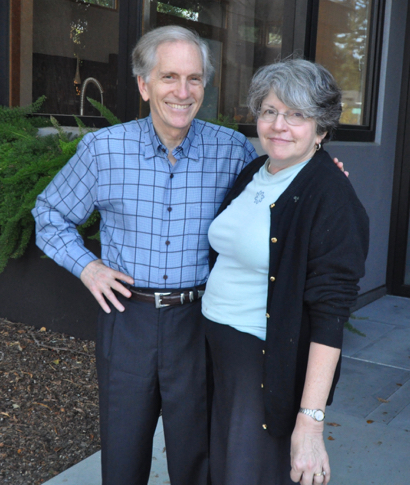 “Our realtor told us that it would be more efficient to build a new home rather than to try to remodel the existing home, and that is what we set out to do. Before we even bought the property, I started trying to figure out how we might build a house around those trees.”

Ron attended Stanford so he was familiar with the Peninsula. He and Ellis lived in Houston for 30 years where he practiced environmental law and she was a portfolio manager for a mutual fund company.

After retiring 11 years ago, he took a course at Rice University on building a “green” house. “It was taught by an architect who had designed environmentally sustainable houses and by a builder who had built sustainable houses,” Ron explains. “Over the course of several weeks it became clear that they thought it was possible to build a ‘green’ house for about the same cost as building a ‘normal’ house, so long as one knew how to approach it and planned carefully. That idea was intriguing to me.”

About that time Ellis proclaimed “not another summer in Houston,” which led them to explore various locations in California before finally selecting Menlo Park and buying an existing Eichler home on a street of Eichlers. 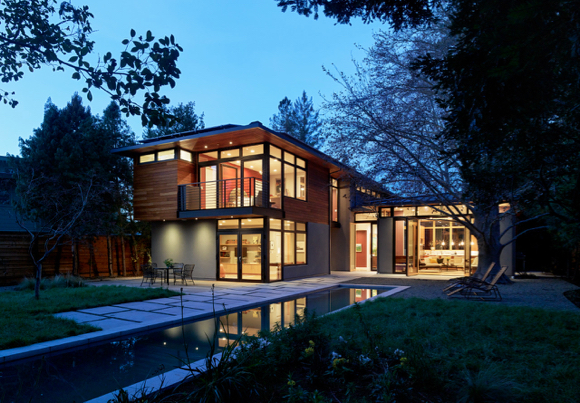 Through a Stanford friend, Ron was referred to Lewis Butler of Butler Armasden Architects. “We first met Lewis here on the lot when the former house was still on the site,” Ron says. “He was instrumental in coming up with the conceptual design for the house, and in working through the permitting process with the City of Menlo Park. Lewis was a big advocate for sustainable architectural design, which is one of the primary reasons that his firm appealed to us.”

The resulting house, which you can tour as part of AIA San Mateo County Home Tour on Saturday, November 4, is a collection of three separate pavilions featuring glass-filled interior spaces and adjacent courtyards; tickets for either a self-guided or guided tour are available online. The backyard is framed by a Copper Beech tree, which provides the treehouse effect as viewed from the master bedroom, and a lap pool.

During the design process, the Bigelows not only took into account the trees but the footprint of the house that was on the property when they purchased it. Realizing that there was also sensitivity around the fact the existing house was an Eichler, they gathered input from their soon-to-be-neighbors.

The effort was appreciated, especially by nearby Eichler homeowners. “The Bigelows did a good job,” Stefan Heller, who owns a nearby Eichler told Eichler News in a 2013 article. “They went to the neighborhood and gave everybody their plans. They talked to everybody; they introduced themselves. And while they tore down an Eichler, they’re replacing it with something that preserves the modern character of the neighborhood.”

Adds Ron: “We’re gratified that people thinks its a good addition to our neighborhood.”

Photos of Bigelow home in daylight and night time by Matthew Millman Photography; photo of  Ron and Ellis Bigelow by Linda Hubbard (c) 2017