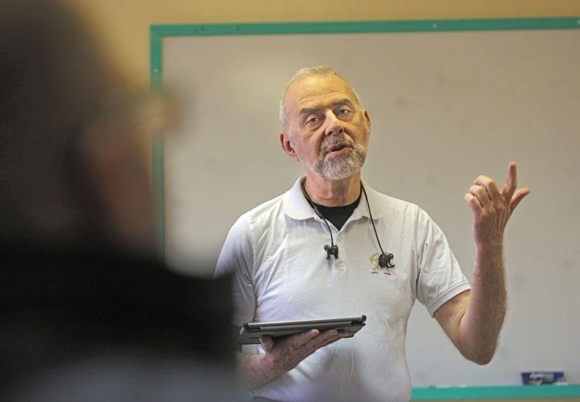 An Egyptian by birth and practicing Muslim, Tarek Mourad is well aware of the misconceptions about Islam that are pervasive. He’ll be addressing those, among other aspects of his faith, at a series of classes held at Trinity Church in Menlo Park beginning January 8. The wider community is invited to attend.

“Some of the misconceptions are perpetuated by ignorance, some by willful agendas, and some through the bad behavior of a minority that catches media attention,” he said. “By far, the most important misconception is that Muslims pray or worship a different God than Christians and Jews.

“Nothing could be farther from the truth. The reality is that Muslims worship the One and Only God, the Creator of all the Creation. This misconception is particularly prevalent in the U.S., and less so in Europe.

He continued: “Then there is the willful vilification of Islam, especially when some wayward guy blows something up.”

After the Egyptian revolution in 1952, his family moved to Kuwait where he attended British and American schools. “By the time I got to high school, my dad was starting to look around at where my brother and I could go to college,” he recalled.  “At the time (late 1960s), immigration to the U.S. from the Middle East was open and accessible. We applied and landed in New York City two days before Halloween in 1969. It was quite a culture shock!”

A business coach by profession, Tarek Mourad is also an active volunteer at the Muslim Community Association in Santa Clara, which he helped found in the early 80s. Over the years, he’s served on all three MCA boards and is one of the “elders who drive for change, reinvention and involvement of the second and third generations.”

While he holds no official position currently, he’s an active volunteer who has been teaching a Discover Islam series since 2005 to recent converts. Unlike many religions, there is no formal conversion process to becoming Muslim. Rather, a convert simply declares his or her new belief in front of a Muslim witness. Hence, the need for education about their new faith.

Much of the Trinity series of classes will draw from the Discover Islam series, not to convert but to educate.

“I’ll start with the big picture, and many of the stories will be familiar and may well bolster the [Christian] listener’s own belief system,” he said. “Then we’ll take a look at who the Prophet Mohammad is and how he ties to Abraham followed by a look at what the Quran is, how it was collected and authenticated. We’ll end with looking at understanding Islam as a  system and a way of life.”

Trinity Church is located at 330 Ravenswood Avenue in Menlo Park. Tarek’s series of four classes are repeated twice weekly — Mondays at 7:00 pm and Wednesday at 10:30 am.