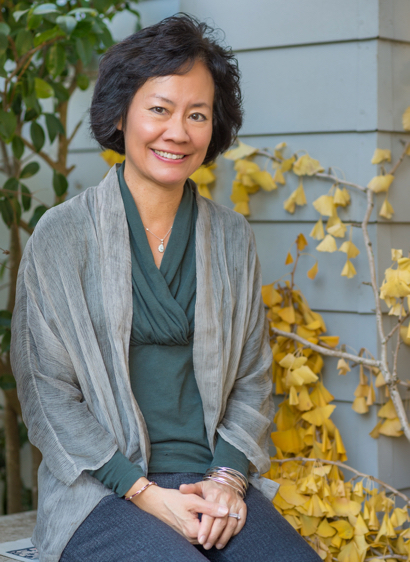 Menlo Park resident Maggie Shen King‘s second go at writing a novel shows perseverance pays off. Not only was An Excess Male picked up by Harper Voyager, but it’s gotten noticed. The Washington Post selected it as one of the five best science fiction and fantasy novels of 2017, applauding Maggie for “distinctive and sympathetic characters” and calling her vision of a not-so-far future “unnerving and thought-provoking.”

Maggie has long thought about writing and used the consequences of China’s One Child Policy as the basis for her novel. “I took one creative writing class in college but couldn’t imagine writing full time,” she said. “Then when my youngest was in middle school, I started taking writing classes at Stanford and got into a writing group. That was about 10 years ago. I wrote another novel but wasn’t able to get an agent. So this is my second novel, the first to get published.”

Born in Taipei and moving to the United States when she was 16, Maggie was taught English while growing up. The premise of her novel is based on actual statistics: Initially conceived to control overpopulation, China’s One Child Policy will, by the year 2030, unintentionally create a society in which more than 25% of men in their late thirties will never have married.

An Excess Male is “the story of one excess male, the less-than-perfect family he seeks to join, and the fight for their version of home, for the freedom to be their true selves, and for the country they have lost to a totalitarian regime that aims to control sex and define the boundaries of marriage in the name of the public good.”

“I wanted to write about China,” she said. “The One Child Policy was intended to control China’s population but it had more than one unintended consequence. The reality was stranger than fiction.”

Maggie doesn’t intend to stop at one published novel. She’s percolating on the idea of writing the next one about China’s ghost or shadow children, those that have never been registered with the government because they are second or third children.

For now, she’s enjoying hearing back from readers and doing book clubs. You can watch at trailer for An Excess Male online produced by fellow Menlo Park resident Connie Tamaddon.