The Menlo Park City School District’s Speaker Series welcomed Sheryl Sandberg, COO of Facebook and author of Lean In and Option B to the Hillview stage on Wednesday, Jan. 17. Ms. Sandberg engaged in an intimate, wide-ranging conversation with MPCSD Superintendent Erik Burmeister to a packed house of district parents, leadership, and invited guests including neighboring superintendents. 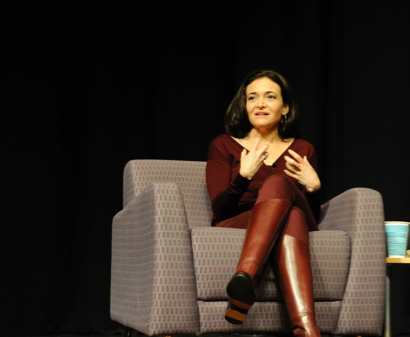 The conversation, titled “Option B: Facing Adversity, Building Resilience, and Finding Joy” began focused on Sandberg’s book, with Mr. Burmeister asking how she is doing today, just a couple years after the sudden passing of her husband Dave. Ms. Sandberg recalled the loneliness of early grief – the discomfort that even close friends and colleagues feel talking to someone suffering loss.

She wryly pointed out that the avoidance of people’s grief for not wanting to remind them of their loss is completely backwards. “I didn’t forget that Dave died. The person next to you at work didn’t forget that she has cancer. You can’t remind someone of their tragedy. We live it everyday. But you can be there and show you care.”

She described the relief she felt when friends and acquaintances began acknowledging her pain, and offered suggestions to the audience for ways to support others in loss – like being available for a hug; helping with the kids; showing up with a meal; being present and available but not forcing a conversation; telling a grieving person that they are still allowed to feel joy.

Ms. Sandberg asked who in the audience had heard of post-traumatic stress disorder, PTSD, and not-surprisingly everyone’s hand shot up. But when she next asked who had heard of post-traumatic growth, there was silence. Post-traumatic growth is a concept that she learned from her friend and Option B co-author, psychologist Adam Grant that describes the valuable, life-altering, and often ultimately worthwhile transformation that going through a devastating tragedy can give a person. 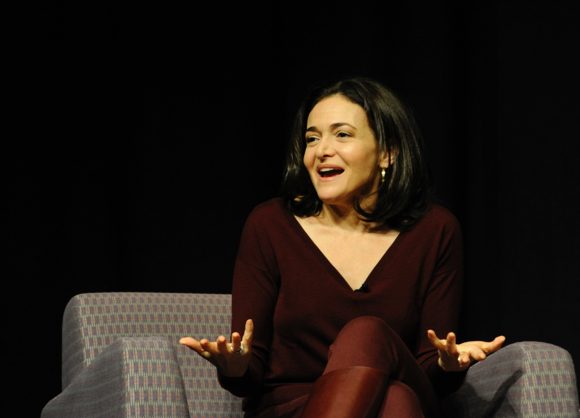 While acknowledging that, of course, she would trade all the growth in the world to have her husband back, reframing tragedy as a growth experience can help one heal and actually look forward to the future. When asked how she knows if her kids are okay, she recalled a story of her son losing a championship basketball game, yet being the only child on the team who didn’t cry. When she asked him if he was okay, he responded, in the exaggerated tone a child will use, “Mom, of course. This is sixth grade basketball. The other kids don’t know.”

While she would give anything for her children to still have a father, suffering a huge loss at a young age does give children a perspective that can instill grit, resilience, and inner strength that will serve them well in all kinds of situations as they grow up. She told the audience that the best thing they can do for their own children is let them feel disappointment sometimes.

All to often, she noted, children in privileged areas have no sense of want or discomfort, making them utterly ill prepared for the challenges life will naturally bring. She urged parents to be honest with their kids, praising them for efforts, but not constantly for every little thing they do. Kids will actually appreciate a parent’s honesty and grow more from having to work through setbacks along the way.

As the conversation naturally flowed to other topics, Ms. Sandberg shared some of her perspective on another one of her passions, equity of opportunity for women and men. She asked all the women in the audience if they’d ever been labeled “bossy” as children, which most had. The same question to men yielded almost no response. “That’s because leading is what’s expected of boys, but not of girls.”

She re-defined “bossy” as “showing executive leadership” and the audience laughed knowingly. “The reason you laugh is because humor relies on what’s not expected. When we say girls are showing their leadership skills, we laugh because it’s not what we expect. That has to change.”

She has devoted much of her life, through her LeanIn.Org Foundation, to fostering a culture within the workplace where women are mentored, supported, and given the exposure that leads to promotions and ultimately parity with men in the boardroom. When asked about the #metoo and #Time’sUp movement, she said the worst thing that could result from it is that men become afraid to mentor women, because workplace relationships are the backbone of career advancement. 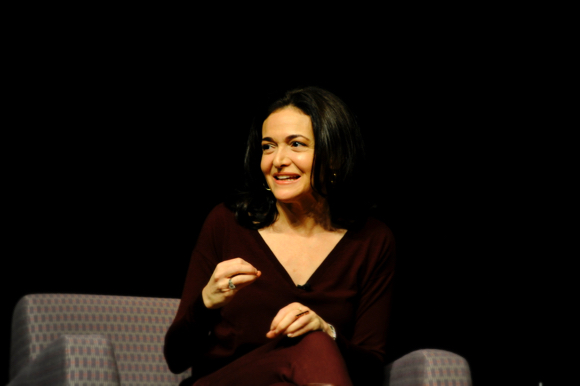 When men only travel and dine with other men – which happens all too often – women are completely left out of the networking opportunities that arise when business bleeds over into social time. “If this happens, the infinitesimal promotion rate that women have now will only go backward.”

The creation of over 34,000 Lean In Circles in more than 150 countries attests to the power of women supporting each other. Ms. Sandberg remarked that in March she will have been with Facebook 10 years, and she hopes to continue helping create ways for women to pursue the opportunities they want. She also invited the audience to join the Lean In contingent in Saturday’s San Francisco Women’s March.

The conversation seemed to strike a cathartic nerve with the audience, and the event concluded with a final question about how the idea of post-traumatic growth might apply to our country as we emerge from what overwhelmingly feels like an exhausting and upsetting year in our civil discourse. Ms. Sandberg embraced that idea and affirmed her belief in the hopefulness and resilience of our society. “I know there are more kind and generous people out there than hateful ones. The kind of community that came together and supported me and my family in our most tragic moment can come together to get through this awful time we are feeling as a country.”

Throughout her remarks, Ms. Sandberg focused on the idea of community. When asked the quintessential question for any accomplished women, “how do you do it?” she answered simply “I never do anything alone.” She stressed that we all need other people, perhaps now more than ever as we fight for a more compassionate and just society. She encouraged the audience to reach out to others, fight for equity for girls and women, be generous in helping our neighbors, and appreciate and share the gifts of time, resources, and relationships that we are fortunate enough to receive.