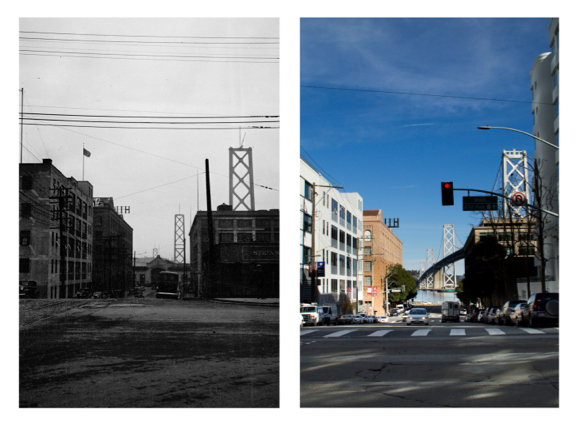 It is a homecoming of sorts for civil engineer and serious amateur photographer Matt Weil whose photography show, “The Bay Bridge: An Engineer’s Perspective,” is on display at Cafe Borrone.

Matt grew up in Menlo Park and would wander into Cafe Borrone walking home from Menlo-Atherton High School. “I remember seeing the different art on the walls,” he recalled. “So many unique displays by local artists. So it was great to meet with Roy [Borrone] and explain the Bay Bridge show concept.” 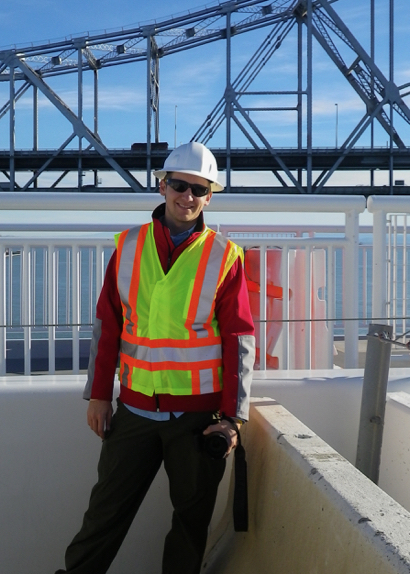 The show is a series of paired photographs, the first taken nearly 85 years ago by Charles Joseph “Joe” Knedel during his time as a civil engineer and surveyor on the original construction of the San Francisco-Oakland Bay Bridge. The second was taken over the last year by fellow civil engineer Matt, who retraced Joe’s footsteps in the streets and on the water around San Francisco.

Joe’s images have been cherished by his family for years but have never been publicly displayed; Matt is married to Joe’s granddaughter. “Eight or nine years ago, my wife’s mother brought out a box of loose negatives and photographs. She was familiar with them. I’d never seen anything like them! I was captivated by the artistry and unique perspective of an engineer on such an immense project.”

Wanting to digitize the photos but unwilling to give up possession of the photos to an outside company, Matt scanned each image one by one at the UC Davis computer lab. “The cool thing was that I got to study each image,” he recalled.

About a year and a half ago, he reviewed them again. “Every time I looked at the negatives I’d see something I hadn’t seen before,” Matt said. “I began to wonder how many of these you could still see from the same perspective today.”

He ended up retracing the footsteps of between 30 and 40 images. “There were a number where I found the location and the right spot, but there was an obstruction.

“The first photograph I shot was probably the most satisfying (pictured top). It was from Harrison and Main. The tricky part was that it was taken from the middle of the intersection. I had 18 seconds to get it right!”

Joe’s exquisite photographic eye is further exemplified by his own words. He wrote home one night in July 1935: “From here, the grandest, scrambling of lights you have ever seen. Red ones, green ones, white and yellow ones. Pale ones, creamy ones and blue ones. Lights blinking, red ones being waved. Funny. No railroad crossings out here. Oh, that’s right. They’re building a bridge. Possibly that has to do with all the cable spinning. Lots of ants, undoubtfully men, running up and down…”

The exhibit’s photographs demonstrate the evolution of San Francisco while highlighting the permanence and artistry of the Bay Bridge. They are hung side by side, so that they can be viewed together.