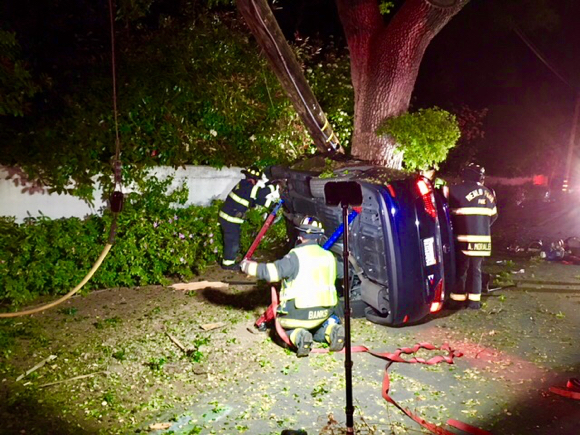 Power was shut down in parts of Atherton and west Menlo Park early Sunday morning so that two men could be freed after their car slammed into a tree on Camino Al Lago.

The vehicle had sheared off a power pole, and live electrical wires were resting on top of it, sparking and arcing from a transformer located on the damaged power pole.

Menlo Park Fire dispatched two fire engines, a ladder truck and a Battalion Chief. The engine crews were assigned to patient care, deploying protective hose lines and securing the power lines while the truck crew was assigned to vehicle stabilization.

Firefighters were unable to secure or remove the power lines from the blue Lexus four-door sedan, hindering access to two male occupants in their twenties, both who were conscious and talking to firefighters.

PG&E was requested, but given the 45-minute response time, Battalion Chief Dan Coyle noted the severity of the situation, and it was decided that the local power grid to portions of Atherton and west Menlo Park would need to be completely shut down before firefighters could safely gain access to the two victims trapped inside the vehicle.

At 4:10 am, PG&E confirmed that it had completely shut down the power grid to the local area and that the power lines should be de-energized. Firefighters checked for back feeding from any local backup generators or other sources, but none was noted, and the vehicle extrication efforts began in earnest.

Truck Captain Steve Susa directed his crew to use adjustable struts and cribbing to first secure and stabilize the Lexus so it would not tip back over. Using the “Jaws of Life” and reciprocal saws, firefighters carefully worked between the tree and splintered power pole and the Lexus to cut apart the vehicle from around the two victims in order to extricate them.

The extrication took another 25 minutes, and both freed patients were then transported to Stanford Trauma Center after being treated by firefighter paramedics.

PG&E electrical personnel arrived at the scene at 4.44 am. The vehicle needed to be removed, and power pole, transformer and lines repaired and replaced, before power could be restored to the local area.

“This is the type of high stakes emergency response and technical rescues our personnel constantly train for,” said Fire Chief Harold Schapelhouman. “It was unfortunate that the power had to be shut down so widely, but in order to safely extricate these two young men, there was no other way to ensure their safety and that of the firefighters, who needed to gain access to them under extremely dangerous circumstances”.