Firefighters responded to a reported smoke investigation at a single story home on Ambar Way in Menlo Park at 5.19 pm Saturday evening, May 19, 2018.

The crew of Menlo Park Fire Engine Four arrived on-scene first at 5.24 pm with Captain Rod Brovelli reporting light smoke coming from an attic vent of the single story home. Within moments after their arrival, Captain Brovelli reported that they had fire in a wall and in the attic as he calmly requested a full first alarm fire response. 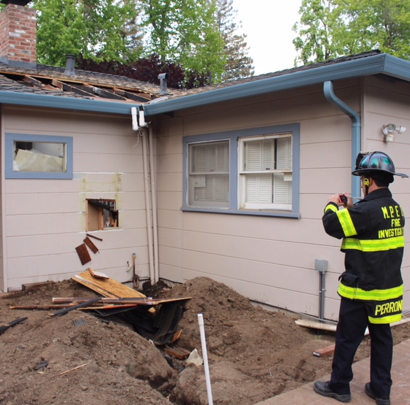 A total of 5 Fire Engines, 1 Ladder Truck and 2 Battalion Chiefs responded to the House Fire for a total of 21 Emergency Personnel. The crew of Menlo Engine Three was assigned inside the attic and found a six foot by six foot area of insulation and roof members on fire that they extinguished. The Fire was brought under control at 5.44 pm.

The owner/occupants were home at the time of the fire and were discussing a plumbing project with their handyman in the backyard when he noticed smoke coming from the homes rear wall where he had earlier sweat copper pipe to install a new exterior faucet.

Fire Chief Harold Schapelhouman said: “The County Fire Agencies Automatic Aid and Greater Alarm Plans were tested today with back to back fires in Redwood City and Menlo Park. While some response times were extended for our out of area resources, the system worked as intended to share resources when needed.”

Menlo Park Fire investigators validated that the fire had started in the wall due to the soldering of the pipe which then horizontally spreading into the homes attic located above the fire.

Menlo Fire Fire Investigator Dave Perrone determined that the cause of the Fire was human error and the origin was the new faucet area. The 2400 square foot single-story, 1950’s-era home sustained a combined loss consisting of structural damage and content loss of $66,000.

Battalion Chief Tom Calvert said that the quick action of the handyman who grabbed a garden hose once he saw smoke, and the firefighters aggressive firefighting actions in the attic stopped the spread of the fire which helped to save the home.