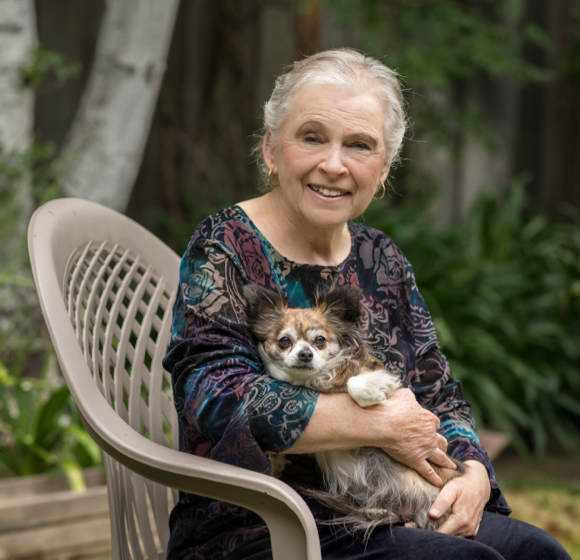 She’s won an Emmy and been nominated for an Academy Award. Now after four decades of filmmaking, Menlo Park resident Dorothy Fadiman is releasing her final film, Chef Darren: The Challenge of Profound Deafness. It will be screened at 3:00 pm on Sunday, June 3, at the Lucie Stern Community Center ballroom in Palo Alto. You can reserve a spot to this free screening online.

The film profiles the determination of a profoundly deaf boy and his family. We see Darren grow from an early, silent childhood to his graduation from the Culinary Institute of America. He goes on to become an award-winning chef at his own trend-setting restaurant. Of note: the film is completely subtitled plus there will be a sign language interpreter for the whole program. View the trailer.

Concentric Media, Dorothy’s film group, has been in active production since 1976; her films have won more than 50 awards and honors. Her book, Producing with Passion: Making Films that Change the World, follows her career and provides a template for beginning filmmakers.

“I’ve been making films back to back without a break for 40 years,” explained Dorothy about her reason to stop producing. “Not a month has gone by that I haven’t been working on a film.

“Each of my films has had a story, and the subject matter has touched me. The twist with this last film is that Darren’s father, Bernie, was one of my best friends in high school. We’ve stayed in touch all these years.

“If I hadn’t seen it for myself, I would have thought Bernie was exaggerating about how successful Darren and the restaurant are. But the place [Darren’s in Manhattan Beach] has been packed every time I’ve been there.

“What caught my attention most was how Darren interacts with both his staff and his customers. He is doing something he loves and he’s figured out a way to do it even with his disability.”

Bernie will make an appearance following the film along with Oz Crosby, the father of two hearing impaired children. Oz was the original funder of Dorothy’s first film.

The program also includes a presentation and discussion with Heidi Feldman, M.D., Ph.D, a leading expert in child language disorders. The event is co-hosted with Abilities United, a Palo Alto-based non-profit organization that advances advocacy, inclusion, and independence for people with developmental disabilities.

Dorothy told us her mission now is to “make sure the films I’ve already made reach the communities that can most benefit.” Her assistant is tasked with employing social media as a distribution tool.

“My films were presented in front of a live audience, and I travelled extensively to get people to attend the screenings,” she said. “Now, through social media, people can be brought to my work virtually rather than physically.”

Photo of Dorothy Fadiman with her dog, Adam, by Irene Searles (c) 2018

What a wonderful career of insightful films produced by Concentric Media!

Hopefully, the public screening of the film will include closed captioning.

The film is completely subtitled plus there will be a sign language interpreter for the whole program. That sentence has been added to the article.