Revisiting Round Table Pizza just shy of its 60th anniversary 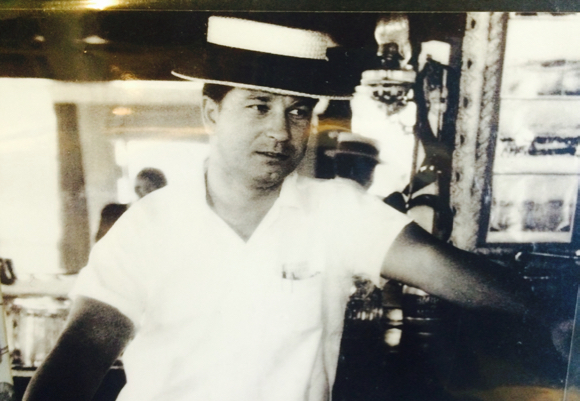 Two national businesses that our town of Menlo Park spawned are still alive and well. One was incorporated in 1998 and first set-up in a garage of a newly-purchased home at 232 Santa Margarita. Now headquartered in Mountain View, Google is part of everyday life.

The other began in a California Water Service building on El Camino Real. Is 59 years long ago enough to be considered history? Only residents now 80 plus were then old enough to be legally served alcohol in 1959. Round Table Pizza opened on December 21st of that year.

Round Table’s future founder, Bill Larson (pictured top), was a sophomore attending Palo Alto High School when a night of teenage pranking occurred. While one policeman was searching for the culprits who swiped the keys he left in his patrol car’s ignition, another prankster let the air out his tires. For being that guy, Bill got expelled. 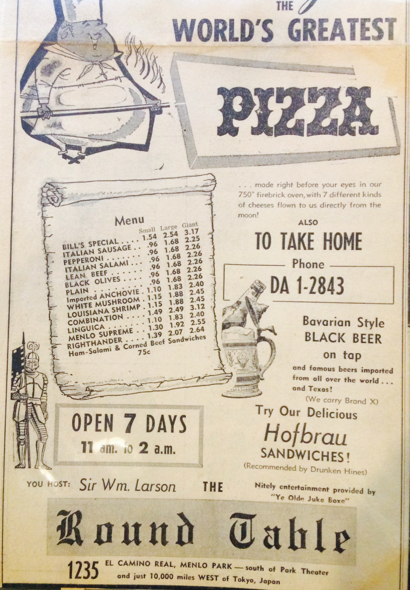 Most newspaper accounts state he was a high school dropout, but a Paly classmate of his told me what really happened. Expulsion for spirited hi-jinks seems better than being a desultory dropout. Out of school at age 17, Bill signed up to join the Navy.

Considering himself with enough pizza knowledge, he borrowed $800 from his father, Henry, a Swedish immigrant. Bill bundled up his household furniture in a pickup truck to present to a bank as collateral for loan. Along with other loans, he purchased the vacant former California Water Service building at 1235 El Camino Real and had enough to furnish it, bare-bones style.

Before pizza paddles could be acquired, each morning he would remove the flat front door to use as a rolling table. Bill and his wife, Toni, did most of the interior work while Henry helped build the business’s tables, including a large round one for which the restaurant was named. The big overhead sign in front had PIZZA PARLO in big letters, missing the R that had to be removed for the installation of a fan required by the health inspector.

Bill  brought his developed marketing humor to his own establishment. The original menus stated that the restaurant was “south of the Park Theater and just 10,000 miles WEST of Tokyo, Japan” (though Menlo Park is only 5,000 miles to the east). The menu also proclaimed the Round Table pizza as “the World’s Greatest” and made of seven kinds of cheeses “flown to us directly from the moon.” Of course, that was before the lunar landing a decade later.

The current Round Table building was constructed a few years later at 1225, where Economy Barbers was located. What used to be 1235 was demolished and is now a parking lot. The style is [thought to be] Elizabethan Tudor but is actually modeled after the Danish look of Solvang, one of Bill’s favorite towns.

Bill Larson had sold 75% of his business in 1978 and retired the following year in 1979, wishing he hadn’t sold at all. He had nine children, most of whom worked at Round Table, including son Bob, who was cleaning tables at age 12.

Bob went to Paly freshman year but graduated from Gunn High School in 1981. In 1987, he purchased the Menlo Park Round Table, which he still owns as well as the Colorado Avenue pizza place in Palo Alto. Bob had his own kids working there as well as his wife. One rainy afternoon, Bob gave me an interview along with a display of Round Table memorabilia.

Following the earthquake of October 17, 1989, the Menlo Park restaurant was the only building around with power and became a gathering place for the community to get a warm dinner and catch the news on TV.

Employees bought the business in 1998. Henry, Bill’s father, died in 2004 at age 94. Two years later, Bill died at age 73. Five hundred and fiftean Round Table restaurants, both franchises and corporate-owned, exist in the seven Pacific Coast states, including Nevada and Arizona, as well as in Dubai, Bahrain and Mongolia, with plans to expand further into the Mideast.

In the 1960s, the Round Table was one of three illustrious Menlo Park watering holes; the other two being the Oasis, opened in 1934, and Magoo’s Pizza Parlor, where the Grateful Dead (then the Warlocks) first played on May 5, 1965. Magoo’s is now Harvest Furniture (639 Santa Cruz Avenue) and who knows what the recently-closed Oasis will become? But Round Table lives on!

The original Round Table slogan of arguably “the World’s Greatest” has evolved to “The Last Honest Pizza.” Having originated it Menlo Park almost 60 years ago, the first Round Table is still open for business, honestly.

Editor’s note: Round Tables restaurants changed to Round Table restaurants. Author Bo Crane is secretary of the Menlo Park Historical Association and this story first appeared in The Gate Post, Vol. XLIV No. 3, July-September, 2018. Photos courtesy of Bo Crane

This story warms my heart. I worked for Bill at RT’s corporate office at 1101 Embarcadero Rd. in Palo Alto in the early 1980’s. His passion for the business was both unique and genuine. When a group of investors from San Francisco came in to purchase the company, he was very emotional. At the same time, RT commissioned a local design firm to redesign the logo and create a long term marketing strategy that highlighted the freshness of our ingredients and final products. That was the beginning of “The Last Honest Pizza”.

Hi Linda,
I have been trying to find information about the Montclair store in Oakland. There was a wonderful castle in the window that everybody remembers but nobody can find a photo or any information about who built it or where it went.

Here’s another pic of the original location, from 1968:

Bo, what an awesome article very well written and factual. We will be celebrating our 60 year anniversary on 12/21/19 come by and say hi!

Thanks,
Bob Larson
Round Table Pizza

Bob, a much belated thank you. I’m glad you were able to see the article. I kept a copy in my car and when I stop by, I’ll give it to you. I came upon your comment today because someone else commented today. Will put down 12/21/19 in the calendar but plan on dropping in sooner. Thank you again for the day of the interview! Regards, Bo

I worked at Round Table on University. Many of my oldest friends worked there, or at the Colorado Ave one in Midtown. My grandfather, a Swedish Carpenter ,also named Larson worked laying brick in the Round Table on California Ave. We kids worked our butts off and we had so much fun doing it. The lines at University were out the door in the 1980’s.
I met Mr Larson a number of years later when my Husband and I were looking to buy our first home. He was selling a property that one of his kids had lived in in the neighborhood of Fry’s Electronics. He did not use a realtor and was hosting his own open house. There was Round Table Pizza on offer for the guests an we talked about his businesses. He was very proud of the business, and his kids, to whom he wanted to give a good life. We couldn’t afford to take on the house as well as the necessary repairs though so we didn’t buy it.
I am grateful for that first job and the experience it gave me. I learned a lot there. I can only say that I regret the loss of the medieval knight theme, with thatched roofs over the counters and Tudor style timber and brick, also stained glass windows and big fiery pizza ovens. The old restaurants are the best. Bring it back Round Table.

Rebecca, thank you for the additional note regarding the Palo Alto Round Tables. I know well the University Avenue RT as we enjoyed it between the Stanford Theater and Baskin Robbins. I can still imagine Lou Rawls’ Love is a Hurting Thing whenever I tasted that RT pepperoni. Regards, Bo Crane

The first Modesto, California Round Table opened in 1977. I was with the opening crew and tended the bar and assisted the pizza-making crew when needed Our pizza was the finest quality and well worth the little extra it cost compared to the competitors. We had a loyal clientele who doted on our superior product and service. Sadly, a move to the Ozark Plateau took me far away from the nearest Round Table so I am forced to consume only second-rate pizzas. Alas.

I celebrated my 12th birthday there. Watched the Raiders beat Redskins with my buddies,as parents drank a load of beer. Good times. I remember Marcus Allen on that T.V. Round Table forever…