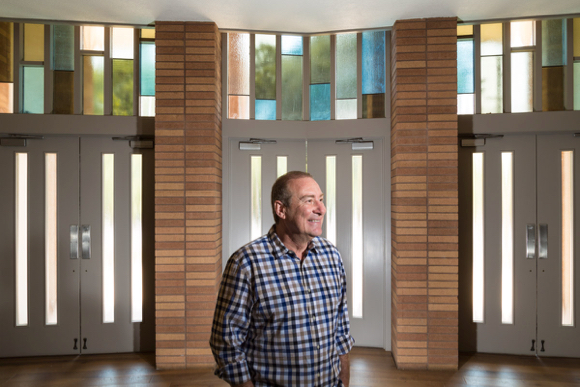 There’ll be a familiar face leading the congregation when New Community Church on Middle Avenue in Menlo Park officially opens on August 19. Charley Scandlyn, who’s served at Menlo Church and led the Ravenswood Education Foundation, is the pastor at the church that was determined to stay a church.

“It was the faithfulness of those who’d long attended [the former] First Baptist Church, especially Nancy Ayers, whose sons I’d gotten to know as part of my youth ministry at MPPC,” said Charley as we sat in the newly-remodeled sanctuary. “The remaining First Baptist congregation had gotten offers from developers. But they really wanted it to remain a church.”

The name, New Community Church, was done with purpose, Charley explained. “The idea is that God is always doing something new; his mercies are new to everyone. Community is what Jesus teaches us, that friendships spring from community. And a church is a sacred place where souls are cared for.”

Charley said the goal is for a diverse community with strong children and youth programs. “Kids really matter,” he said. “Teenagers and young adults are not the church of tomorrow, they are the church of today.”

The denomination of the new church is American Baptist, which emerged in the middle of the 19th century when the Baptist church split over the issue of slavery. American Baptists are described  as “Christ-centered, biblically grounded, ethnically diverse people called to radical personal discipleship in Christ Jesus.”

“The Rev. Martin Luther King was an American Baptist pastor,” said Charley. “As a community, we’ll examine what it means to follow Christ not only for ourselves as individual but for the good of the world through service in areas where there is real need.”

Outreach efforts will focus on the Ravenswood Education Foundation and the Opportunity Services Center in Palo Alto.

Charley expressed high hopes for the 10:00 am service on August 19. “I love people and God loves people, whether they go to church or not,” he said. “We hope people will come. We want to engage the community. That’s our goal — engaging and serving the community. And we’re here for the long haul.”

Congratulations and Best Wishes to New Community Church on their kick-off this weekend!

Son, young adult interested in joining any groups yet

Yes, we met you at MPPC

Many thanks for your time

Yes, New Community has Sunday services at 10 am each week at 1100 Middle Avenue (at Arbor) in Menlo Park.

Hope to see you at NCC