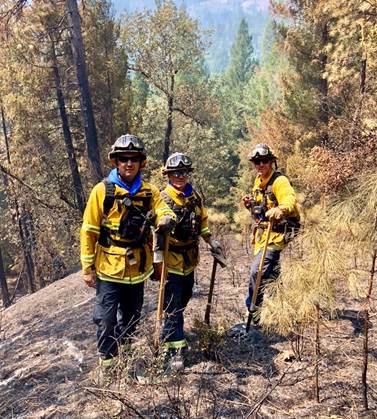 Menlo Park Firefighters Ken Babcock, Dan Giraudo, Scott Basset and Scott Johnson have all been on the front lines of the Carr Fire working near Rainbow Lake since last Thursday, as part of the Southern San Mateo County Type 1 “Heavy” Strike Team, consisting of five fire engines, a command vehicle and 22 personnel.

The crew relieved four other Menlo Fire personnel who had been deployed to the Carr Fire when it first started near Redding, 14 days earlier. Those firefighters were happy to be relieved and rotated out along with the other members of all three San Mateo County Type 1 Strike Teams, consisting of 15 fire engines, three command vehicles and 66 personnel from every Fire Agency in San Mateo County.

The fire engines are in short supply, so the crews were rotated but the Type 1 or “Heavy” fire engines were left in place as the work horses that daily support the fire fight. These municipal engines are typically used for structure protection and normally stay on paved roads, but nothing is typical this fire season with so many fires and resources in high demand and short supply.

Southern Strike Team Leader Deputy Chief Don Long, with Menlo Fire, arrived on Thursday as well and after addressing a mechanical problem with Menlo Engine 4, the Strike Team pulled a 24 hour shift on the North end of the fire where Chief Long texted “we have a lot burning below us with spot fires over the line. At daybreak I called in helicopters for water drops and used dozers to ring the spot fires. A lot of work for our first shift.”