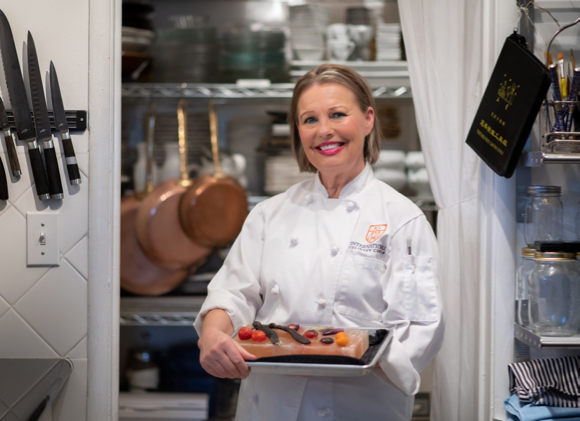 Chantale Doinel has been an esthetician in Menlo Park since 2000, and many know her in that role. So, it may surprise some to learn she’s also a chef.

Her second profession is something that came initially out of necessity. The financial crisis of 2008 saw her business plummet. “Facials are thought of as a luxury, and my bookings fell 50%,” she explained. “What kept me going was cooking for people. Growing up, my mother had taught me well.

“I also started offering French cooking classes for small groups. The class included the preparation of a dinner from beginning to end.

“People started calling me ‘chef,’ and I’d tell them ‘I may be a good cook but I’m not a chef.’ Slowly the idea of returning to school, which I did at age 62, attending the International Culinary Center.”

Chantale, who also lives in Menlo Park, apprenticed at the Village Pub in Woodside under then chef de cuisine Orlando Pagán, whose praises she sings. “Working with him significantly contributed to my growth and helped me define what I wanted to do as a chef. I learned how to harmonize food, about presentation. My school was very good, but working with Orlando, I learned what perfection is.”

Today Chantale caters events like a recent wedding at the Bohemian Grove and The Taste of Woodside. She also enjoys doing large dinner parties. “Now I have two jobs,” she said. “Tuesday through Saturday I do skin care. My work as chef and caterer is always planned in advance. So neither interferes with the other.

“I love people and love pleasing people. When I put food on the table for people, they leave happier than when they came. I’m proud of what I do!”