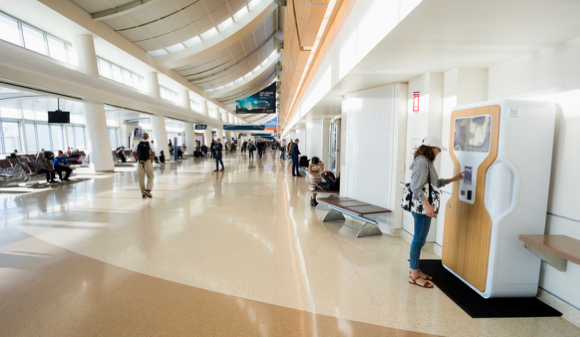 Last Wednesday morning, the Drop Water team wheeled a kiosk into the San Jose Airport for installation in Terminal B. The kiosk is the first of its kind — it makes and bottles drinks on demand, in 100% compostable bottles.

The company is the brainchild of Scott Edwards, CEO of Drop Water who was profiled on InMenlo last July, and his team of engineers and nutritionists. What started as a senior project while attending Cal Poly has evolved into a company poised to take on the bottled water industry — and the immense amount of waste that comes with it.

“It’s been a long road from ideation to signing a contract with a major international airport,” said Scott. “There have been many people along the way who have helped out with the technology behind this amazing machine and the packaging inside of it. We’re thrilled to be serving the San Jose International Airport and its travelers.”

Instead of tapping into and filtering municipal water at a centralized facility, like other major bottled water brands, Drop Water brings the bottling process to the customer, eliminating the need for transporting water. The kiosks are hooked up to the local water source, which is then filtered and chilled before being delivered to the customer. The compostable bottles are empty and stacked inside of the machine, and kept dry until a customer places an order.