Menlo Park born and raised, John Shelsta is one of the Peninsula’s favorite chefs 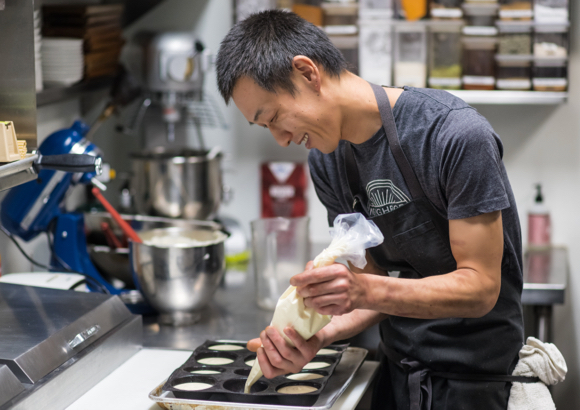 John Shelsta’s Instagram account says it all: @loveforbutter. Known for his pastries — and, in particular, croissants — John wasn’t sure what he wanted to do after graduating from Menlo-Atherton High School. “I’d been around cooking, but I never thought of making it a career.”

But that he has done. He’s now at Zola in Palo Alto, working with chef/owner Guillaume Bienaime, who he met while working as a cook at the now closed Marché in Menlo Park. He drifted into pastry because, he says, “it seemed easier to find a job as a pastry chef.”

John has long used pop ups to sell pastry, first outside of Kristi Borrone’s restaurant in Woodside, Station One (now under different ownership and called The Firehouse Bistro).”I’d put a table out front and sell out,” he recalls.

By the time he was doing pop ups at Zola, his pastries had become well known and the line would stretch for a couple of blocks. “People appreciate a good pastry,” he says, and he views baking “as a healthy way to share with people.”

John lived in Hawaii for a year, flying back once a month to do his pop ups before returning to California and landing at Zola about a year ago. While he’s glad to be back in the kitchen, he says his ultimate goal is is to open a small cafe/bakery somewhere on the mid-Peninsula. Given that he doesn’t have financial backing — and that a bakery needs space for an oven and a refrigerator — achieving that goal may take some time.

“I’m hoping to find something a little off the beaten path but accessible,” he says. “I haven’t been as aggressive as I could be. But I’m optimistic that when the timing is right, I’ll find that needle in the haystack.”

And John’s pastry fans will be glad when he does. Meanwhile they can enjoy the full breadth of his cooking at Zola.

How about opening a bakery on Alameda in Menlo Park near the Dutch Goose? We really need one in this area!