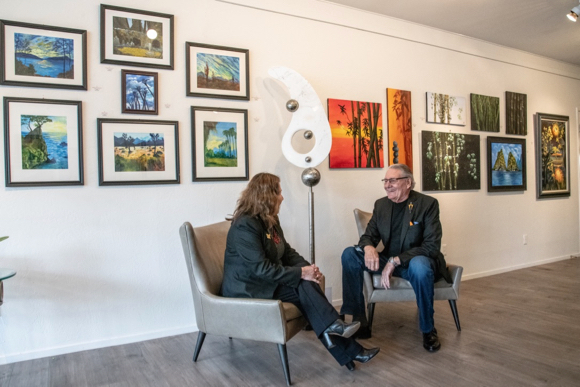 You could make a case that Marcela Del Alcazar and Ron Silzer were meant to discover each other in what they both term “retirement.” 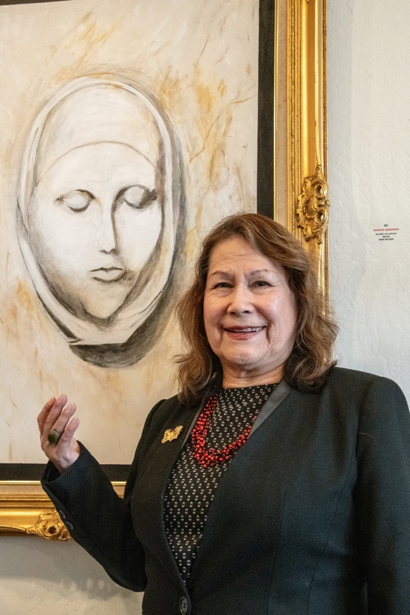 Marcela opened her gallery Marcela’s Village a year ago June with the idea of showcasing local and Latin American arts and crafts. “The is my retirement job,” she said. “It’s fun to have an opportunity to follow my dream. I had a gallery in San Francisco for five years but closed it when the rent increased. I’m very happy being in Menlo Park.

“I met Ron when he came into the gallery with a friend. He liked one of the paintings and bought it for his granddaughter.”

Ron, who retired in 2000, started painting in 2012 when his girlfriend at the time, Cora, was diagnosed with terminal cancer and would nap in the afternoon. One day she surprised Ron with some acrylic paint, brushes and canvases, declaring, “Why not paint while I am napping?” And that is how he started painting.

Ron paintings, “In Memory of Cora,” are at Marcela’s Village (883 Santa Cruz Ave.), and the two of them are joining forces this weekend for a fundraiser, April 13 from 4:00 to 8:00 pm, where 80% of sale profits will go to support the Lucile Packard Children’s Hospital.

Most of Ron’s paintings are landscapes, often painted from a photograph. “I try to paint people from time to time but landscapes are really my calling.”

Since coming to the United States from Peru 46 years ago, Marcela has had various careers. But the love of art  has transcended them all. “Art is a gift to bring to people. To me, it’s an expression of love and peace — and I think that’s important!”