Take a look at this gorgeous orange Oldsmobile 88 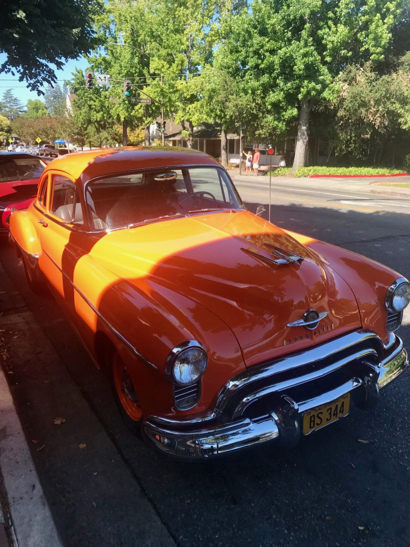 We stumbled upon this stunning classic Oldsmobile 88 parked on Santa Cruz Avenue this morning. While the license plate stated “1947” a quick Wikipedia search revealed that the model wasn’t made until 1949. So we’re a bit confused so hoping so car aficionado – or even better the owner – can add some clarity.

Here’s a recap from Wikipedia:

“Oldsmobile introduced the 88 badge in 1949. It was named to complement the already-existing 76 and 98, and took the place of the straight-8 engined 78 in the model lineup. The new car used the same new Futuramic B-body platform as the straight-6 engined 76 but paired it with the new 303 cu in (5.0 L) Rocket V8 engine producing 135 horsepower (101 kW).

“This combination of a relatively small light body and large, powerful engine made it widely considered to be the first muscle car. The Rocket 88 vaulted Oldsmobile from a somewhat staid, conservative car to a performer that became the one to beat on the NASCAR (National Association for Stock Car Auto Racing) circuits. It won six of the nine NASCAR late-model division races in 1949, 10 of 19 in 1950, 20 of 41 in 1952, and was eventually eclipsed by the low-slung, powerful Hudson Hornet, but it was still the first real “King of NASCAR.”  This led to increased sales to the public. There was a pent up demand for new cars in the fast-expanding post-World War II economy, and the 88 appealed to many ex-military personnel who were young and had operated powerful military equipment.

“The 88 enjoyed a great success, inspiring a popular 1950s slogan, “Make a Date with a Rocket 88”, and also a song, “Rocket 88″, often considered the first rock and roll record. Starting with the trunk-lid emblem of the 1950 model, Oldsmobile would adopt the rocket as its logo, and the 88 name would remain in the Olds lineup until the late 1990s, almost until the end of Oldsmobile itself.”

Alas, we wish the gorgeous orange Olds wasn’t partially shaded. And we hope its owned by a Giants fan!

You are reminding me that on July 6 in nearby Palo Alto California in Santa Clara County at the Mitchell Park center the guitarist Jimmy Vivino (from the Conan O’Brien show) played the show using a custom designed bow Diddley guitar that he fashioned with Cadillac ornaments. And likewise Mitch Woods a Marin-based pianist mostly known for New Orleans sounds sat in and calls his band the rocket 88’s, like the song.

Mitch Woods despite his band name arrived in a German luxury sporty car, relieved that The community center had a grand piano so that he would not have to schlep an electronic keyboard, Whereas Vivino and his partner Bob Margolin (from muddy Waters’ band) had driven up from Los Angeles in a Japanese rental.