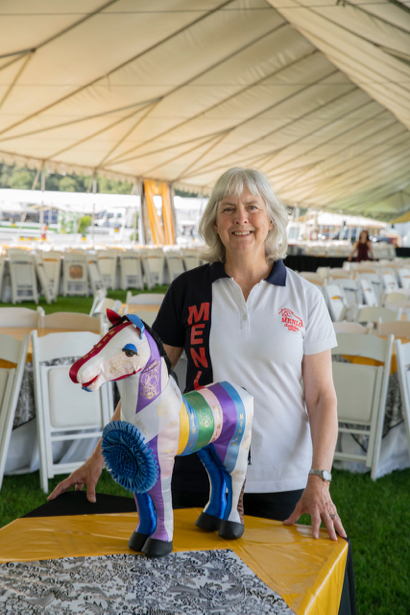 For the past 10 years, Menlo Park resident Diann Lewis has volunteered at the Menlo Charity Horse Show, which starts today at the Menlo Circus Club in Atherton, overseeing some of the food served at the Sponsor Tent.

“I rode with a couple people on the show committee, and my daughter Amy competed at the show,” she said, as final preparations were underway yesterday, including putting the sponsor names on the very clever centerpieces that replicate a show jump.

“I also have a cousin who is blind,” she continued, referencing that proceeds from the show go to local non-profit, Vista Center for the Blind and Visually Impaired.

Diann took up riding in her mid-40s due to her two daughters’ involvement. Her current horse, Molly, is a cross between a Warmblood and a Thoroughbred, and together they compete in 2′ Hunters. 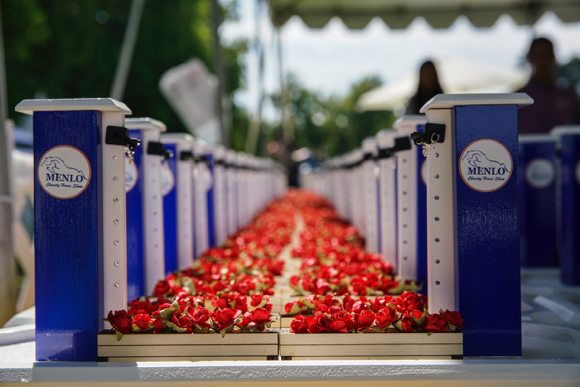 Food in the sponsor tent is a day long event, with Diann focusing on lunch, which is supplied by the Circus Club, and evening appetizers, largely donated or prepared by volunteers.

Diann is kept too busy to actually enjoy the show’s many events. But if she could take time out, she said it would be to watch the Horse and Hounds event. “It’s fun! Horse and rider go over big jumps and the rider gets off and takes a leashed dog over little jumps.”

The Menlo Charity Horse Show runs today through Sunday, Aug. 11. Admission is $10 daily or $35 for weekly pass; children under 12 and people 65 and over are free. A schedule of events is posted online.

You an learn more about the history of the show and how it came to be in this interview with show founder and Atherton resident Betsy Glikbarg.

Photos by Jules Appleby (c) 2019; Note: the horse in photo with Diann was made from competitors’ ribbons