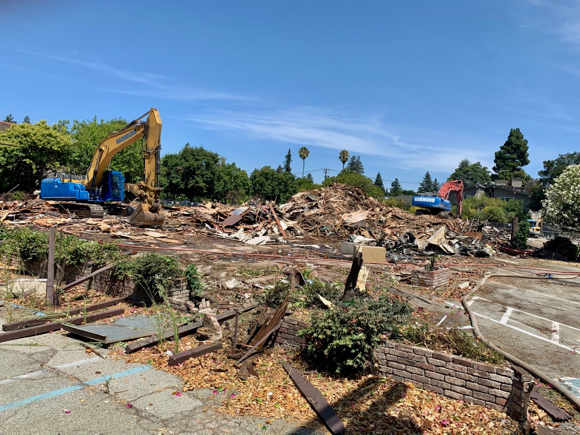 Rubble is what’s left of Beltramo’s, a much revered Menlo Park wine and liquor store, following the demolition of the landmark building. In 2016, the Beltramo family announced it was closing the store, which had been operated by the family since 1882, and selling the property. It most recently temporarily housed a store selling fitness equipment.

Meanwhile, a mile or so south, there’s news about a new use for the Oasis, which coincidentally was housed in a building once owned by the Beltramo family. In an article for the Daily Post, Emily Mibach reports that the building’s current owners, HuHan Three LLC, is renting the space once occupied by the Oasis and Menlo-Atherton Glass to a Palo Alto-based venture capitalist firm, Pear VC. According to the Post, the interior has been gutted.

“Fortunately, the large OASIS sign over the door was removed and given to us,” emails Jim Lewis of the Menlo Park Historical Association. “It was turned over to Ray Mueller, who in turn, stored it at the City’s Municipal Corporation (Public Works) yard, located on Burgess Drive.

“Due to the building’s historic roots, a change in occupancy from a restaurant to an office building (including M-A Glass, which generates sales tax dollars) will need to go through a full EIR report process, as I understand it.”

In the Post article, the attorney for the current owners, disputed this saying “there is no need for his clients to file for a use change permit.”

“The Oasis Building has a lot of deferred maintenance, so from that standpoint, the property may get a long overdue facelift, and remain around perhaps for another 100 years,” comments Jim.

And about the saved entrance sign, Mayor Ray Mueller emails: “The hope is that when the Snack Shack remodel project is approved for Burgess Park, the sign can be included in the rebuild.”

City of MP…..you should be ashamed with the destruction of iconic building. Why not renovate/recycle and make them historical usable sites…..your decisions are ruining the city!

I am sad that Menlo Park has no backbone or historical appreciation of irreplaceable iconic cultural institutions . . . the weak city council and mayors have allowed Sunset Magazine, Oasis, Applewood Inn, BBC, and Foster’s Freeze to close. The character of the city has been lost and replaced with a vanilla business district with no personality.

Um, so you think government should be able to force businesses that are losing money to stay in operation, or to stay put in costly facilities when they want to downsize or move where rent is cheaper? Seems a bit intrusive…

On the other hand, it’d be fun to drive a Studebaker when driving to Blockbuster to rent video tapes for my Betamax. Or to buy a Gateway digital camera to take selfies that I’d upload to CompuServe, using my brand-new Hayes Smartmodem.

Pete-
They do it all the time…for example Tesla and Solindra for a few!

This type of snarky and arrogant disdain for history and tradition is a big part of what has made the Peninsula such a soulless place over the past few decades. Relatively young cities in prosperous areas like Menlo Park are vulnerable to rapacious outsiders who fetishize novelty and commerce over social bonds and continuity. No one is suggesting forcing businesses to operate, but those woven into the fabric of a city should certainly be afforded every advantage to stay and at the very least historic buildings should be protected.

I share your sadness about the changing landscape of the town, but as Pete correctly — albeit unsentimentally — pointed out, these businesses closed on their own accord as the times changed. The new generation of Menlo residents have little use for cultural pillars from yesteryear or greasy burgers.

I used to live right by the Oasis, in the old Beltramo bldg. Our house had been part of Camp Fremont.

You hit the nail on the head. No character any more. Just like any other high end city. Not a village any longer for sure.

Lived here for 40 years, and I just think it’s lost some of its small town charm. Growth is necessary, just not so much.

I lived next door to the Oasis. My father rented his property as half of the parking for the Oasis. Our apartments were once the nurses quarters for Camp Fremont. Nobody ever made a big deal about Camp Fremont since the first World War. Now that it’s disintegrating it’s a big deal. What we need is for Menlo Park to celebrate it’s history so that maintaining it is part of it’s policy and is important to those who now live there and want it preserved.

Question for Ray Mueller….This Oasis sign you have…..is it the one pictured in this article with the arrow pointing down???

Second attempt as I don’t see my post. Just curious if the sign Ray Mueller is referring to is the one in the photo above, with the arrow pointing down to the entrance. That was such a cool sign!