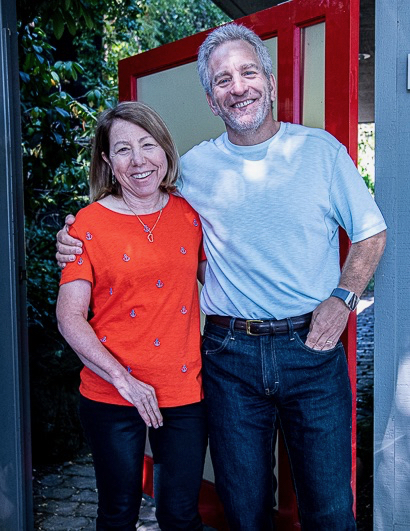 As an academic, Stanford professor Debra Meyerson spent a career creating and sharing knowledge. Now following a severe stroke in 2010, she’s not only continuing to share knowledge but the book she co-authored with her son, Danny Zuckerman, Identity Theft: Rediscovering Ourselves After Stroke, also served as part of her therapy, particularly from an emotional standpoint.

“It really took Deb two years before she was willing to acknowledge ‘stroke survivor’ as part of her identity,” said her husband Steve Zuckerman, who we visited with along with Debra at their Ladera home.

Added Debra: “It was important to think through the identity of not only who I am now but who I want to be.”

The stroke caused Debra to lose all movement in her right arm and leg as well as her ability to communicate.

“I think the process of writing the book is a fantastic window on Deb’s journey,” said Steve. “At the beginning the motivation was just to prove she could! Then it shifted to focus on how to rebuild a life of meaning while dealing with disabilities.”

Writes Debra on the book’s website: “While I won my struggle to survive, much of my identity — as a Stanford professor, a speaker and writer, an athlete, a mother and a wife — was taken from me. My mind was working but I was trapped inside a broken body, unable to do what I used to do. And maybe even worse, I couldn’t tell anyone what I was experiencing.
​​
“With hard work and a lot of help I regained enough mobility to again be independent, and have recovered some ability to speak. But I have come to accept that I will never again have all the capabilities I once had.”

Identify Theft goes beyond just Debra’s journey. It profiles 25 other people — caregivers, spouses, therapists and doctors. It looks at the importance of advocacy on two levels, from both the survivor and the family. “No one cares about your journey as much as you,” said Debra.

While there are many resources for recovering from the physical aspects of a stroke, Debra and Steve discovered there was less focus on the emotional side of stroke recovery. To help, they’ve formed a non-profit, Stroke Forward, to support survivors and caregivers.

All of the authors’ proceeds from sale of Identity Theft will fund the work of Stroke Forward. People interested in donating to the new non-profit can do so by sending a check to Stroke Forward, 3130 Alpine Rd., Suite 288-210, Portola Valley, CA 94028.

One fantastic person she is.