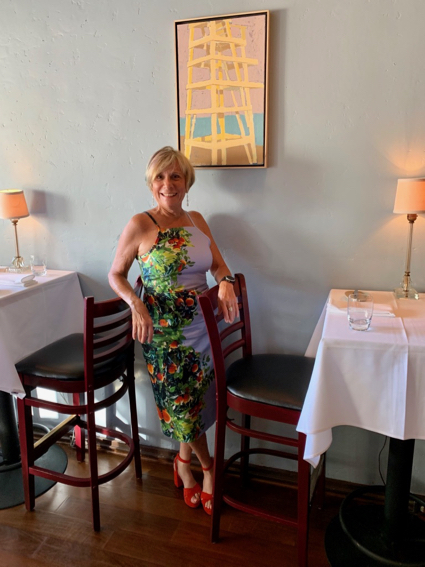 I’m a long time fan of Flea Street Cafe, which owner Jesse Cool has shepherded through good times and bad before celebrating its 39th anniversary yesterday. “I really don’t know how I did it,” is how she succinctly summed up the accomplishment.

I first dined there in the early ’80s when visiting my Menlo Park parents, who still lived in the house I grew up in, (although I was in SoCal). It was a special treat restaurant with, if I remember correctly, a kind of hippie decor. A couple of menus from that era accompanies this post.

Moving back home in 1990, my family was a more frequent diner at Late for the Train and Cool Eatz (still miss that downtown take out, which could always be counted on to put food on the dinner table for this non-cook). But thanks to editorial visits for InMenlo — along with frequent dinners with “the neighbors” as the Cafe host called us — I’ve been lucky enough to get to know Jesse the person, not just Jesse the restauranteur.

Think how ahead of the curve the early menus were, featuring organic foods from sustainable farms. Last night’s “Pacific Catch,” a cioppino of sorts, was fabulous as was the peach and burrata salad. Not every town of 35,000 or so boasts a restaurant of this caliber, complete with Mitchell Johnson paintings on the wall! 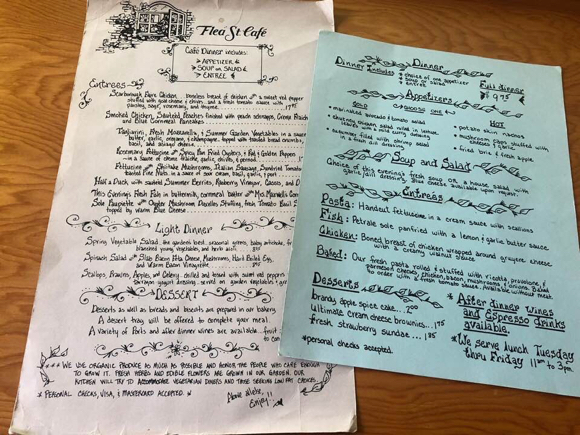 Wrote Jesse on Facebook yesterday: “All of us are amazed at how the years went by. Thank you to every guest who, at our tables, celebrated life and permeated the walls of Flea Street with love and inspiration!

“We are ever grateful to our staff, some who have been with us for over 20 years. And thank our mentors and heroes, the Farmers, Ranchers, Fishermen, Wine Makers, Dairies who have given us organic, local, respectfully raised ingredients that continue to inspire our cooking. Please stop by tonight or throughout the weekend for a glass of Sparkling 🥂 or a Martini and let us toast you🍸!

And what can we look forward to for Flea Street’s 40th anniversary? Jesse promises “biscuits with toppings at an outside celebration in the parking lot!”

Flea Street Cafe is located at 3607 Alameda de las Pulgas; reservations are recommended (although there is some bar seating for walk-ins).

A great article on Jesse Cool and her wonderful food. We also miss the downtown restaurant/take out revision, but enjoy the café at the Cantor museum on the Stanford campus. Looking forward to the 40th parking lot bash.